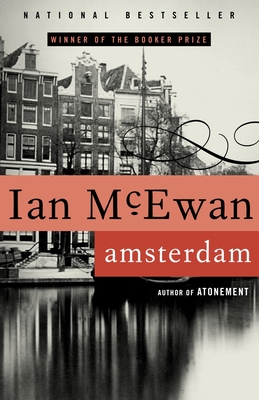 The Booker Prize-winning contemporary morality tale—cleverly disguised as a comic novel—from the acclaimed author of Atonement.

On a chilly February day, two old friends meet in the throng outside a London crematorium to pay their last respects to Molly Lane. Both Clive Linley and Vernon Halliday had been Molly's lovers in the days before they reached their current eminence: Clive is Britain's most successful modern composer, and Vernon is a newspaper editor. Gorgeous, feisty Molly had other lovers, too, notably Julian Garmony, Foreign Secretary, a notorious right-winger tipped to be the next prime minister. In the days that follow Molly's funeral, Clive and Vernon will make a pact with consequences that neither could have foreseen…

Praise For Amsterdam: A Novel…

Winner of the Booker Prize

"At once far-reaching and tightly self-contained, a fin de siécle phantasmagoria." —New York

"Ian McEwan has proven himself to be one of Britain's most distinct voices and one of its most versatile talents. . . . Chilling and darkly comic." —Chicago Tribune

"By far his best work to date . . . an energizing tightrope between feeling and lack of feeling, between humanity's capacity to support and save and its equally ubiquitous penchant for detachment and cruelty." —The San Diego Union-Tribune

"You won't find a more enjoyable novel . . . masterfully wrought, sure to delight a reader with even half a sense of humor." —The Atlant Journal-Constitution

"McEwan writes the sort of witty repartee and scathing retort we wished we thought of in the heat of battle. On a broader scale, McEwan's portrayal of the mutually parasitic relationship between politicians and journalists is as damning as it is comic." —The Christian Science Monitor
or support indie stores by buying on
Copyright © 2020 American Booksellers Association