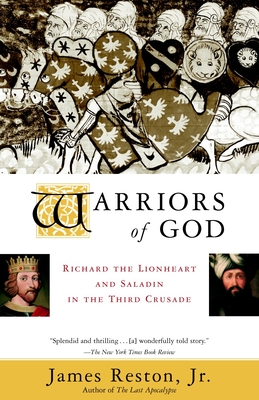 Richard the Lionheart and Saladin in the Third Crusade

Acclaimed author James Reston, Jr.'s Warriors of God is the rich and engaging account of the Third Crusade (1187-1192), a conflict that would shape world history for centuries and which can still be felt in the Middle East and throughout the world today. James Reston, Jr. offers a gripping narrative of the epic battle that left Jerusalem in Muslim hands until the twentieth century, bringing an objective perspective to the gallantry, greed, and religious fervor that fueled the bloody clash between Christians and Muslims.

As he recounts this rousing story, Reston brings to life the two legendary figures who led their armies against each other. He offers compelling portraits of Saladin, the wise and highly cultured leader who created a united empire, and Richard the Lionheart, the romantic personification of chivalry who emerges here in his full complexity and contradictions. From its riveting scenes of blood-soaked battles to its pageant of fascinating, larger-than-life characters, Warriors of God is essential history, history that helps us understand today's world.

James Reston, Jr. is a journalist and the author of more than a dozen books, including The Last Apocalypse, Dogs of God, and Galileo: A Life. He lives in Chevy Chase, Maryland.

Praise For Warriors of God: Richard the Lionheart and Saladin in the Third Crusade…

“A refreshingly unbiased popular history of the Third Crusade which deserves a place on the shelf of every history teacher.” —The Washington Post Book World

“Reading this book, one sways between horror and exhilaration. The magnitude of human suffering is mind-boggling, but the warriors’ adventures are the stuff of boyhood fantasy.” —Forbes FYI