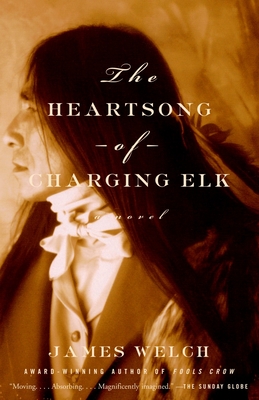 The Heartsong of Charging Elk

From the award-winning author of the Native American classic Fools Crow, James Welch gives us a richly crafted novel of cultural crossing that is a triumph of storytelling and the historical imagination.

Charging Elk, an Oglala Sioux, joins Buffalo Bill's Wild West Show and journeys from the Black Hills of South Dakota to the back streets of nineteenth-century Marseille. Left behind in a Marseille hospital after a serious injury while the show travels on, he is forced to remake his life alone in a strange land. He struggles to adapt as well as he can, while holding on to the memories and traditions of life on the Plains and eventually falling in love. But none of the worlds the Indian has known can prepare him for the betrayal that follows. This is a story of the American Indian that we have seldom seen: a stranger in a strange land, often an invisible man, loving, violent, trusting, wary, protective, and defenseless against a society that excludes him but judges him by its rules. At once epic and intimate, The Heartsong of Charging Elk echoes across time, geography, and cultures.

Praise For The Heartsong of Charging Elk: A Novel…

"One of the year's best works of fiction."
--Chicago Tribune

"Brilliant... A masterpiece... Charging Elk [is] one of the most resonant characters of our current literature."
--Star Tribune

"Ambitious, moving and altogether nourishing... Welch's novel moves with sensual grace... A novel with an expansiveness of heart and mind, an intimate analogue of Indian estrangement worthy of any readerly voyage."
--Chicago Sun-Times

"Vivid [and] evocative... A story of survival... It's a familiar story, but Welch takes the conceit one step further, creating a Wild West show of his own."
--Los Angeles Times Book Review

James Welch is the author of four other novels, including Fools Crow, which won the American Book Award and the Los Angeles Times Book Award. He attended schools on the Blackfeet and Fort Belknap reservations and studied writing under the legendary teacher Richard Hugo. He died in 2003.
Loading...
or
Not Currently Available for Direct Purchase