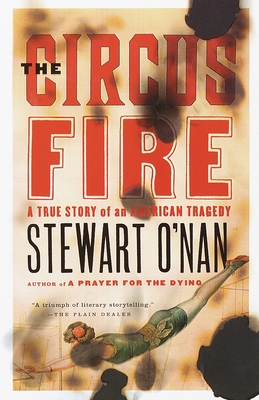 A True Story of an American Tragedy

The acclaimed author of Emily, Alone and Henry, Himself brings all his narrative gifts to bear on this gripping account of tragedy and heroism—the great Hartford circus fire of 1944.

It was a midsummer afternoon, halfway through a Ringling Brothers Barnum and Bailey Circus performance, when the big top caught fire. The tent had been waterproofed with a mixture of paraffin and gasoline; in seconds it was burning out of control. More than 8,000 people were trapped inside, and the ensuing disaster would eventually take 167 lives.

Steward O'Nan brings all his narrative gifts to bear on this gripping account of the great Hartford circus fire of 1944. Drawing on interviews with hundreds of survivors, O'Nan skillfully re-creates the horrific events and illuminates the psychological oddities of human behavior under stress: the mad scramble for the exits; the perilous effort to maneuver animals out of danger; the hero who tossed dozens of children to safety before being trampled to death. Brilliantly constructed and exceptionally moving, The Circus Fire is history at its most compelling.

Stewart O'Nan is the author of fifteen previous novels, including West of Sunset, The Odds, Emily Alone, Songs for the Missing, Last Night at the Lobster, A Prayer for the Dying, and Snow Angels. His 2007, novel Last Night at the Lobster, was a national bestseller and a finalist for the Los Angeles Times Book Prize. He was born and raised in Pittsburgh, where he lives with his family.

Praise For The Circus Fire: A True Story of an American Tragedy…

“An extraordinary book. O’Nan is amazing in his handling of the abundance of fact, rumors and legends that have built up around this fire.”–USA Today

“[O’Nan’s]non-fiction is as accomplished as his fiction.... [The Circus Fire is] as gripping as any thriller.”–The Seattle Times
or support indie stores by buying on
(This book is on backorder)
Copyright © 2020 American Booksellers Association