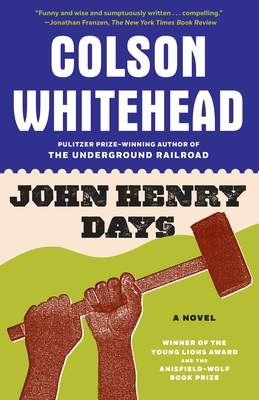 From the bestselling, two-time Pulitzer Prize-winning author of The Underground Railroad and The Nickel Boys, a novel that is "funny and wise and sumptuously written" (Jonathan Franzen, The New York Times Book Review).

Colson Whitehead’s triumphant novel is on one level a multifaceted retelling of the story of John Henry, the black steel-driver who died outracing a machine designed to replace him. On another level it’s the story of a disaffected, middle-aged black journalist on a mission to set a record for junketeering who attends the annual John Henry Days festival. It is also a high-velocity thrill ride through the tunnel where American legend gives way to American pop culture, replete with p. r. flacks, stamp collectors, blues men , and turn-of-the-century song pluggers.

John Henry Days is an acrobatic, intellectually dazzling, and laugh-out-loud funny book that will be read and talked about for years to come.

“A narrative tour de force that astonishes on almost every page.” —Time

“Does what writing should do; it refreshes our sense of the world. . . . An ambitious, finely chiseled work.” —John Updike, The New Yorker

“[Whitehead] takes on a multitude of issues with a rich and probing imagination.His reputation is likely to soar.” —Ishmael Reed, The Washington Post Book World

“A feast for famished readers.” —Newsweek