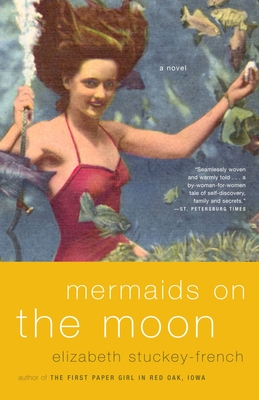 Mermaids on the Moon

When thirty-five-year-old France’s father calls to say that her mother, Grendy, has run off, France suspects foul play and heads south to investigate. Recently reunited with fellow former “mermaids” from Mermaid Springs, FL—one of the Sunshine State’s premier, pre-Disney attractions—Grendy had successfully revived her career in kitschy underwater pageants. But if she doesn’t find herself or let herself be found soon, she’ll miss the big Labor Day show. While the other fin-toting “merhags” regale France with stories of old—particularly the night Elvis came to town—they’re suspiciously tight-lipped about Grendy’s disappearance. Increasingly convinced that Grendy is in trouble—and that a psychic cat might hold the clue—she makes a series of unexpected, extraordinary discoveries about Mermaid Springs, her mother, and, in turn, herself.

Praise For Mermaids on the Moon…

“Stuckey-French . . . has a deep sensibility for the intimate dramas of unheralded lives played out on the miniscule stages of supermarkets, family restaurants and trailer parks.” —The Miami Herald

“Hilarious and wacky, this story displays a variety of family loves and disappointments in a quirky, original way.” —Elizabeth Strout, author of Amy and Isabelle

“Funny and witty, filled with enough quirky characters to open its own amusement park.”—San Francisco Chronicle

“A lot of fun. . . . Creates a believable world of women aging not with resigned grace but with feisty zest.” —The Atlanta Journal-Constitution

Elizabeth Stuckey-French is the author of the short story collection The First Paper Girl in Red Oak, Iowa. Her stories have appeared in The Atlantic Monthly, Gettysburg Review, Southern Review, Five Points, and other literary journals. She lives in Tallahassee, Florida, where she teaches fiction writing at Florida State University.
Loading...
or
Not Currently Available for Direct Purchase