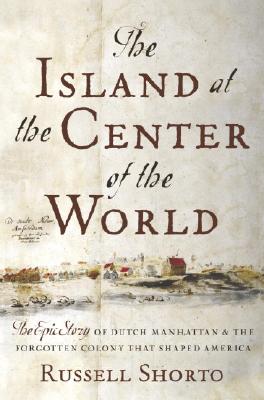 The Island at the Center of the World

The Epic Story of Dutch Manhattan, the Forgotten Colony that Shaped America

In a landmark work of history, Russell Shorto presents astonishing information on the founding of our nation and reveals in riveting detail the crucial role of the Dutch in making America what it is today.

In the late 1960s, an archivist in the New York State Library made an astounding discovery: 12,000 pages of centuries-old correspondence, court cases, legal contracts, and reports from a forgotten society: the Dutch colony centered on Manhattan, which predated the thirteen “original” American colonies.  For the past thirty years scholar Charles Gehring has been translating this trove, which was recently declared a national treasure.  Now, Russell Shorto has made use of this vital material to construct a sweeping narrative of Manhattan’s founding that gives a startling, fresh perspective on how America began.

In an account that blends a novelist’s grasp of storytelling with cutting-edge scholarship, The Island at the Center of the World strips Manhattan of its asphalt, bringing us back to a wilderness island—a hunting ground for Indians, populated by wolves and bears—that became a prize in the global power struggle between the English and the Dutch.  Indeed, Russell Shorto shows that America’s founding was not the work of English settlers alone but a result of the clashing of these two seventeenth century powers.  In fact, it was Amsterdam—Europe’s most liberal city, with an unusual policy of tolerance and a polyglot society dedicated to free trade—that became the model for the city of New Amsterdam on Manhattan.  While the Puritans of New England were founding a society based on intolerance, on Manhattan the Dutch created a free-trade, upwardly-mobile melting pot that would help shape not only New York, but America.

The story moves from the halls of power in London and The Hague to bloody naval encounters on the high seas.  The characters in the saga—the men and women who played a part in Manhattan’s founding—range from the philosopher Rene Descartes to James, the Duke of York, to prostitutes and smugglers.  At the heart of the story is a bitter power struggle between two men: Peter Stuyvesant, the autocratic director of the Dutch colony, and a forgotten American hero named Adriaen van der Donck, a maverick, liberal-minded lawyer whose brilliant political gamesmanship, commitment to individual freedom, and exuberant love of his new country would have a lasting impact on the history of this nation.


Praise For The Island at the Center of the World: The Epic Story of Dutch Manhattan, the Forgotten Colony that Shaped America…

Praise for The Island at the Center of the World
“Russell Shorto’s dramatic adventure tale about the settling of Manhattan will transform the way we look at American history. The Dutch colony, founded just three years after the Puritans landed in Massachusetts, quickly became the gateway for Germans, Italians, Jews, Scandinavians, Africans, and others who created the pluralistic mix that would define a new nation. Shorto’s book recounts the fascinating struggle between Peter Stuyvesant and the lesser-known but more influential Adriaen van der Donck, whose appreciation for individual tolerance laid the foundation for our Bill of Rights and helped to create our national character. It’s also the story of the remarkable age of exploration led by Henry Hudson and others who spread the culture of the European Renaissance to a distant wilderness. Based on a wealth of documents that archivist began translating forty years ago, Shorto has produced both a triumph of scholarship and a rollicking narrative. The result is an exciting drama about the roots of America’s freedoms.” —Walter Isaacson, author of Benjamin Franklin: An American Life

“The Island at the Center of the World ranks among the best books ever written about New Amsterdam, the Dutch settlement on Manhattan that would become New York City. Shorto’s prose is deliciously rich and witty, and the story he tells—drawing heavily on sources that have only recently come to light—brings one surprise after another. His rediscovery of Adriaen van der Donck, Peter Stuyvesant’s nemesis, is fascinating.” —Edwin G. Burrows, coauthor of Gotham: A History of New York City to 1898, winner of the Pulitzer Prize for History