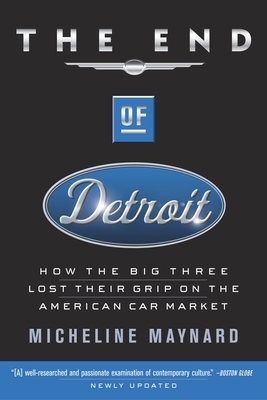 The End of Detroit (Paperback)

An in-depth, hard-hitting account of the mistakes, miscalculations and myopia that have doomed America’s automobile industry.

In the 1990s, Detroit’s Big Three automobile companies were riding high. The introduction of the minivan and the SUV had revitalized the industry, and it was widely believed that Detroit had miraculously overcome the threat of foreign imports and regained its ascendant position. As Micheline Maynard makes brilliantly clear in THE END OF DETROIT, however, the traditional American car industry was, in fact, headed for disaster. Maynard argues that by focusing on high-profit trucks and SUVs, the Big Three missed a golden opportunity to win back the American car-buyer. Foreign companies like Toyota and Honda solidified their dominance in family and economy cars, gained market share in high-margin luxury cars, and, in an ironic twist, soon stormed in with their own sophisticatedly engineered and marketed SUVs, pickups and minivans. Detroit, suffering from a “good enough” syndrome and wedded to ineffective marketing gimmicks like rebates and zero-percent financing, failed to give consumers what they really wanted—reliability, the latest technology and good design at a reasonable cost. Drawing on a wide range of interviews with industry leaders, including Toyota’s Fujio Cho, Nissan’s Carlos Ghosn, Chrysler’s Dieter Zetsche, BMW’s Helmut Panke, and GM’s Robert Lutz, as well as car designers, engineers, test drivers and owners, Maynard presents a stark picture of the culture of arrogance and insularity that led American car manufacturers astray. Maynard predicts that, by the end of the decade, one of the American car makers will no longer exist in its present form.

MICHELINE MAYNARD covers the automobile and airline industries for The New York Times and has written for Fortune, USA TODAY, Newsday, and U.S. News & World Report. She is a lecturer on the global auto industry at the University of Michigan School of Business, and is the author of two books, including Collision Course Inside the Battle for General Motors. She lives in Ann Arbor, Michigan

Praise For The End of Detroit: How the Big Three Lost Their Grip on the American Car Market…

Acclaim for The End of Detroit

“[A] well-researched and passionate examination of contemporary culture, automotive and otherwise.”
—Boston Globe