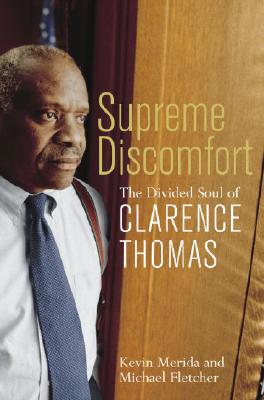 The Divided Soul of Clarence Thomas

SUPREME DISCOMFORT originated from a much-commented-upon profile of Clarence Thomas that appeared in an August 2002 issue of The Washington Post Magazine. In it, Kevin Merida and Michael Fletcher, both Post staffers, both black, crafted a haunting portrait of an isolated and bitter man, savagely reviled by much of the black community, not entirely comfortable in white society, internally wounded by his passage from a broken family and rural poverty in Georgia to elite educational institutions to the pinnacle of judicial power. He has clearly never recovered from the searing experience of his Senate confirmation hearings and the "he said/she said" drama of the accusations of sexual harassment by Anita Hill.

SUPREME DISCOMFORT tracks the personal odyssey of perhaps the least understood man in Washington, from his poor childhood in Pin Point and Savannah, Georgia, to his educational experiences in a Catholic seminary and Holy Cross, to his law school years at Yale during the black power era, to his rise within the Republican political establishment. It offers a window into a man who straddles two different worlds and is uneasy in both—and whose divided personality and conservative political philosophy will deeply influence American life for years to come.


Praise For Supreme Discomfort: The Divided Soul of Clarence Thomas…

Advance Praise for Supreme Discomfort:
“Clarence Thomas, even as the quiet justice, is a clanging symbol of politics and race in our time. I can’t think of two writers I’d rather have cut through the cacophony of the Thomas mythology than Kevin Merida and Michael A. Fletcher. In Supreme Discomfort, they have found the divided soul that divides a nation.” —David Maraniss, author of First in His Class: A Biography of Bill Clinton


“Scrupulously fair and endlessly entertaining. Supreme Discomfort by Kevin Merida and Michael A. Fletcher is the definitive work on the Supreme Court’s most elusive—and fascinating—personality.” —Jeffrey Toobin, author of The Run of His Life and Too Close to Call, legal affairs analyst for CNN, and staff writer at The New Yorker.


“An engrossing biography of a conflicted man . . . [Merida and Fletcher] have done a superb job with this both harsh and sympathetic life of Clarence Thomas . . . an unflinching look at success and race in America.” —Kirkus Reviews (starred)