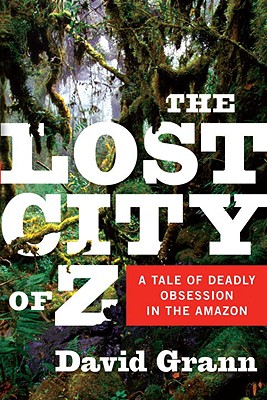 A grand mystery reaching back centuries. A sensational disappearance that made headlines around the world. A quest for truth that leads to death, madness or disappearance for those who seek to solve it. "The Lost City of Z" is a blockbuster adventure narrative about what lies beneath the impenetrable jungle canopy of the Amazon.
After stumbling upon a hidden trove of diaries, acclaimed "New Yorker" writer David Grann set out to solve "the greatest exploration mystery of the twentieth century": What happened to the British explorer Percy Fawcett and his quest for the Lost City of Z?
In 1925 Fawcett ventured into the Amazon to find an ancient civilization, hoping to make one of the most important discoveries in history. For centuries Europeans believed the world's largest jungle concealed the glittering kingdom of El Dorado. Thousands had died looking for it, leaving many scientists convinced that the Amazon was truly inimical to humankind. But Fawcett, whose daring expeditions helped inspire Conan Doyle's "The Lost World, " had spent years building his scientific case. Captivating the imagination of millions around the globe, Fawcett embarked with his twenty-one-year-old son, determined to prove that this ancient civilization which he dubbed Z existed. Then he and his expedition vanished.
Fawcett's fate and the tantalizing clues he left behind about Z became an obsession for hundreds who followed him into the uncharted wilderness. For decades scientists and adventurers have searched for evidence of Fawcett's party and the lost City of Z. Countless have perished, been captured by tribes, or gone mad. As David Grann delved ever deeper into the mystery surrounding Fawcett's quest, and the greater mystery of what lies within the Amazon, he found himself, like the generations who preceded him, being irresistibly drawn into the jungle's green hell. His quest for the truth and his stunning discoveries about Fawcett's fate and Z form the heart of this complex, enthralling narrative.


Praise For The Lost City of Z: A Tale of Deadly Obsession in the Amazon…

“At once a biography, a detective story and wonderfully vivid piece of travel writing….suspenseful….rollicking….Fascinating….reads with all the pace and excitement of a movie thriller and all the verisimilitude and detail of firsthand reportage, and it seems almost surely destined for a secure perch on the best-seller lists.” —Michiko Kakutani, The New York Times

“David Grann, recounts Fawcett's expeditions with all the pace of a white-knuckle adventure story…..What a grand tale it is!....Grann follows its twists and turns admirably. Thoroughly researched, vividly told, this is a thrill ride from start to finish.”
--The Washington Post

“[O]utstanding….a powerful narrative, stiff lipped and Victorian at the center, trippy at the edges, as if one of those stern men of Conrad had found himself trapped in a novel by García Márquez.” —Rich Cohen, The New York Times Book Review

“[V]ividly alive….What makes Mr. Grann's telling of the story so captivating is that he decides not simply to go off in search of yet more relics of our absent hero -- but to go off himself in search of the city that Fawcett was looking for so heroically when he suddenly went AWOL.”
--Simon Wincester, The Wall Street Journal

“A fascinating account….Grann expertly juggles narratives….breathtaking clarity of scene and immediacy; any writer who can breathe life into letters written by scientists in the early 1900s deserves more than a hat tip. Grann brings Fawcett's remarkable story to a beautifully written, perfectly paced fruition.”
--The Los Angeles Times


“A fascinating yarn that touches on science, history, and some truly obsessive personalities.”
--Entertainment Weekly


“To read “The Lost City of Z” is to feel grateful that Grann himself bothered to set out for the Amazon in search of the bones of an explorer whose body was long ago reclaimed by the jungle.”
--Christian Science Monitor

"Grann has an extraordinary sense of pacing, and his scenes of forest adventure are dispatched in passages of swift, arresting simplicity." -- Bookforum


“David Grann takes the reader on an extraordinary journey that snakes through expeditionary archives and ends deep in the Amazonian forest. The Lost City of Z is a gripping tale of a lost world and of the magnificent obsession of those who have sought it.” —Caroline Alexander, author of The Bounty and The Endurance

“David Grann's Lost City of Z is a deeply satisfying revelation–a look into the life and times of one of the last great territorial explorers, P. H. Fawcett, and his search for a lost city in the Amazon. I mean, what could be better–obsession, mystery, deadly insects, shrunken heads, suppurating wounds, hostile tribesmen–all for us to savor in our homes, safely before the fire.”
--Erik Larson, author of Thunderstruck, Devil in the White City and Isaac’s Storm


"Few things are better than experiencing a horrendous adventure from the comfort of your own armchair. Hordes of mosquitoes, poison-arrow attacks, bizarre and fatal diseases, spies in starched collars, hidden outposts of Atlantis -- what's not to like? The Lost City of Z is like a wonderful 19th-century tale of exotic danger -- except that David Grann's book is also a sensitively written biographical detective story, a vest pocket history of exploration, and a guide to the new archaeological research that is exploding our preconceptions of the Amazon and its peoples."
--Charles Mann, author of 1491

"The Amazon has had many chroniclers but few who can match David Grann's grasp of history, science, and especially narrative. Shifting seamlessly between the past and present, THE LOST CITY OF Z is a riveting, totally absorbing real-life adventure story."
--Nathaniel Philbrick, author of Mayflower and In the Heart of the Sea

"The story of Z goes to the heart of the central questions of our age. In the battle between man and a hostile environment, who wins? A fascinating and brilliant book."
--Malcolm Gladwell, author of Blink and The Tipping Point

"What a wild and adventurous life! In the deft storytelling hands of David Grann, explorer Percy Fawcett emerges as one of the most ambitious, colorful, just plain intrepid figures ever to set foot in the New World. Part Indiana Jones, part Livingstone, and part Kit Carson, Fawcett has found his perfect biographer in Grann, who has gamely endured every conceivable Amazonian hardship to piece together the story of this British swashbuckler and his crazed search for a vanished civilization." — Hampton Sides, author of Blood and Thunder and Ghost Soldiers

"With his riveting work, David Grann emerges on our national landscape as a major new talent. His superb writing style, his skills as a reporter, his masterful use of historical and scientific documents, and his stunning storytelling ability are on full display here, producing an endlessly absorbing tale about a magical subject that captivates from start to finish. This is a terrific book." —Doris Kearns Goodwin, author of a Team of Rivals

“A fantastic story of courage, obsession, and mystery, THE LOST CITY OF Z is gripping from beginning to end. In the pantheon of classic exploration tales, this stands out as one of the best.” —Candice Millard, author The River of Doubt

“A wonderfully researched true story about an intrepid adventurer, a colorful cast, and an obsession that grips both him and the author.”
-- Walter Isaacson, author of Einstein