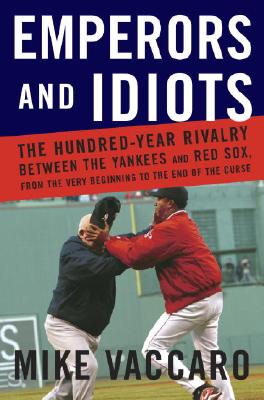 The Hundred Year Rivalry between the Yankees and Red Sox, From the Very Beginning to the End of the Curse

The New York Yankees. The Boston Red Sox. For a hundred years, no two teams have locked horns as fiercely or as frequently – and no two seasons frame the colossal battle more perfectly than 2003 and 2004. Now, with incredible energy and access, leading sports columnist Mike Vaccaro chronicles the history of the greatest rivalry in sports, and the two stunning American League Championship Series that define a century of baseball.

October 17, 2003: A night no Yankees or Red Sox fan will ever forget. At 12:15 am, bottom of the eleventh inning of game seven of the ALCS, New York third-baseman Aaron Boone launches a ball over Yankee Stadium’s left-field fence. The Yankees win their 39th pennant – and send the perennially vexed Boston Red Sox home . . . again . . . suffering another devastating loss to their longtime nemesis.

October 20, 2004: A year later, an eerie reprise – but this time things are different. After losing three straight to the Yankees, Boston has charged back to win the next three, forcing a decisive game seven. From the start of the game Boston is in control, and by winning this game they march toward their first World Series victory since 1918.

These two explosive years define an extraordinary, epic rivalry – from Mariano Rivera and Roger Clemens to Pedro Martinez and Curt Schilling, Derek Jeter and Aaron Boone to David Ortiz and Manny Ramirez, from nearly a century of Yankee domination to the undisputed breaking of “The Curse.” With the razor-sharp instincts that have made him a top sports journalist, Mike Vaccaro delves into the history of the rollicking rivalry: a vicious collision in 1903 (between the New York Highlanders and Boston Pilgrims) that draws first blood; the era of Babe Ruth and his legendary trade from the Red Sox to the Yankees, ushering in the notorious Curse; the golden age of DiMaggio and Williams; the unstoppable power of Mantle and Maris; the heart and soul of Fisk and Yastrzemski versus Pinella and Munson; and the modern era of dueling owners, skyrocketing payrolls, and a renewed rivalry that attracts sell-out crowds even to Yankees-Red Sox spring training games.

EMPERORS AND IDIOTS is as lively, fascinating, and raucous as the teams themselves – a must-have volume for any Yankees or Red Sox fan.

Praise For Emperors and Idiots: The Hundred Year Rivalry between the Yankees and Red Sox, From the Very Beginning to the End of the Curse…

“Mike Vaccaro dissects the always intense relationship between the Yankees and the Red Sox the way a scholarly grandfather could analyze the two sides of a family tree: with deep, detailed stories about the two teams and two cities that are nice or nasty and never dull. Every fan knows this rivalry cannot be rivaled in sports. But in a style that feels like a history lesson being taught from the bleachers, Vaccaro reminds us again and again why that is so true.” — Jack Curry, The New York Times national baseball columnist

“Exceptionally researched and cleanly written, [Emperors and Idiots] takes the subject seriously but doesn’t get bogged down in detail. Just about everyone who is anyone is interviewed and, amazingly, there are a few new stories here. But perhaps the best thing about this book is its evenhandedness.” —Yahoo! Sports