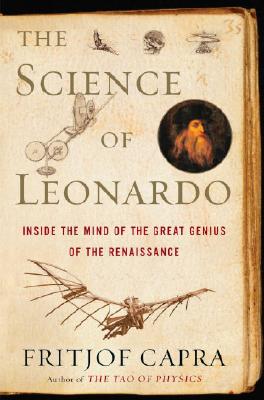 The Science of Leonardo

Inside the Mind of the Great Genius of the Renaissance

Leonardo da Vinci’s pioneering scientific work was virtually unknown during his lifetime. Now acclaimed scientist and bestselling author Fritjof Capra reveals that Leonardo was in many ways the unacknowledged “father of modern science.” Drawing on an examination of over 6,000 pages of Leonardo’s surviving notebooks, Capra explains that Leonardo approached scientific knowledge with the eyes of an artist. Through his studies of living and nonliving forms, from architecture and human anatomy to the turbulence of water and the growth patterns of grasses, he pioneered the empirical, systematic approach to the observation of nature—what is now known as the scientific method.

Leonardo's scientific explorations were extraordinarily wide-ranging. He studied the flight patterns of birds to create some of the first human flying machines. Using his understanding of weights and levers and trajectories and forces, he designed military weapons and defenses, and was in fact regarded as one of the foremost military engineers of his era. He studied optics, the nature of light, and the workings of the human heart and circulatory system. Because of his vast knowledge of hydraulics, he was hired to create designs for rebuilding the infrastructure of Milan and the plain of Lombardy, employing the very principles still used by city planners today. He was a mechanical genius, and yet his worldview was not mechanistic but organic and ecological. This is why, in Capra's view, Leonardo's science—centuries ahead of his time in a host of fields—is eminently relevant to our time.

Enhanced with fifty beautiful sepia-toned illustrations, The Science of Leonardo is a fresh and important portrait of a colossal figure in the world of science and the arts.

Praise For The Science of Leonardo: Inside the Mind of the Great Genius of the Renaissance…

Advance Praise for The Science of Leonardo

"Minutely researched, vividly written, and endlessly fascinating, The Science of Leonardo opens up a realm which has never been adequately appreciated. It makes one wonder, as Capra does, whether the history of science might have been quite different had a full publication of Leonardo's notebooks not had to wait until four centuries after his death."
--Dr. Oliver Sacks

“The Science of Leonardo is a fascinating glimpse of the road not taken by Western Science. Capra makes a compelling case that the science of the future may look a lot more like Leonardo's than Bacon's or Descartes -- a science of systems, non-reductive and akin to an art.
--Michael Pollan, author of The Botany of Desire and The Omnivore’s Dilemma.
"A brilliant and sound assessment of Leonardo's approach to science, viewed in the cultural context of his time, and through the development of scientific thought in the succeeding centuries. Both deep and new, it is a bold and successful exploration of the working of Leonardo's mind."

“Fritjof Capra paints a vivid and compelling picture of one of the greatest geniuses in history, Leonardo da Vinci, by skillfully weaving together all the different strands of Leonardo's master works and finally revealing the true power and breathtaking scope of his life. Leonardo himself would have nodded in approval of this book, because for the first time it crystallizes the entire body of his work into a coherent, unified whole.”
--Michio Kaku, Henry Semat Professor of Theoretical Physics at the Graduate Center of the City University of New York, and bestselling author of HYPERSPACE.

Praise for Tao of Physics

“I have been reading the book with amazement and the greatest interest, recommending it to everyone I meet. . . .[Capra has] done a magnificent and extremely important job.” —Joseph Campbell

Praise for The Web of Life

“[Capra] has reassembled the fragments of modern science into something that at last we can understand . . . a wonderful book we all need to read.” —James Lovelock, author of Healing Gaia

“This book, a rare blending of the heart and the head, should be required reading.” —Theodore Roszak, Director, Ecopsychology Institute, California State University, Hayward, and author of The Memoirs of Elizabeth Frankenstein