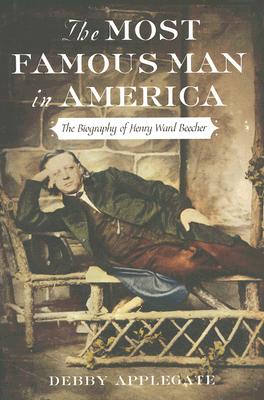 The Most Famous Man in America (Hardcover)

The Biography of Henry Ward Beecher

No one predicted success for Henry Ward Beecher at his birth in 1813. The blithe, boisterous son of the last great Puritan minister, he seemed destined to be overshadowed by his brilliant siblings—especially his sister, Harriet Beecher Stowe, who penned the century’s bestselling book Uncle Tom’s Cabin. But when pushed into the ministry, the charismatic Beecher found international fame by shedding his father Lyman's Old Testament–style fire-and-brimstone theology and instead preaching a New Testament–based gospel of unconditional love and healing, becoming one of the founding fathers of modern American Christianity. By the 1850s, his spectacular sermons at Plymouth Church in Brooklyn Heights had made him New York’s number one tourist attraction, so wildly popular that the ferries from Manhattan to Brooklyn were dubbed “Beecher Boats.”

Beecher inserted himself into nearly every important drama of the era—among them the antislavery and women’s suffrage movements, the rise of the entertainment industry and tabloid press, and controversies ranging from Darwinian evolution to presidential politics. He was notorious for his irreverent humor and melodramatic gestures, such as auctioning slaves to freedom in his pulpit and shipping rifles—nicknamed “Beecher’s Bibles”—to the antislavery resistance fighters in Kansas. Thinkers such as Emerson, Thoreau, Whitman, and Twain befriended—and sometimes parodied—him.

And then it all fell apart. In 1872 Beecher was accused by feminist firebrand Victoria Woodhull of adultery with one of his most pious parishioners. Suddenly the “Gospel of Love” seemed to rationalize a life of lust. The cuckolded husband brought charges of “criminal conversation” in a salacious trial that became the most widely covered event of the century, garnering more newspaper headlines than the entire Civil War. Beecher survived, but his reputation and his causes—from women’s rights to progressive evangelicalism—suffered devastating setbacks that echo to this day.

Featuring the page-turning suspense of a novel and dramatic new historical evidence, Debby Applegate has written the definitive biography of this captivating, mercurial, and sometimes infuriating figure. In our own time, when religion and politics are again colliding and adultery in high places still commands headlines, Beecher’s story sheds new light on the culture and conflicts of contemporary America.

Praise For The Most Famous Man in America: The Biography of Henry Ward Beecher…

Praise for The Most Famous Man in America

“Henry Ward Beecher was a phenomenon: the scion of an amazing family, the most renowned American preacher of his day, an anti-slavery stalwart — and the main protagonist in one of the most sensational sex scandals of the Victorian era.  If you thought that the personalities and machinations surrounding the Clinton impeachment scandal were interesting, you will find the Beecher exposé riveting.  More important, Debby Applegate has vividly brought Beecher and his entire era to life, in all of their piety, idealism, pomposity, and pride.  I recommend her book highly to lovers of imposing historical figures and their tangled stories.”

— Sean Wilentz, winner of the Bancroft Prize for The Rise of American Democracy

“A wonderful portrait of a charismatic preacher with a deeply flawed private life, this biography vividly conveys the color and contradictions of 19th century America.  With a sure grasp of history, penetrating insights into religion, and many marvelous turns of phrase, Applegate brings to life a time that uncannily prefigures our own.”


“At last, Henry Beecher receives the comprehensive treatment he is due, in this perceptive, engaging and balanced study.”

— James MacGregor Burns, winner of the Pulitzer Prize and National Book Award for history and biography


“A lively narrative of 19th-century religion, power, passion, and politics, as well as a perceptive study of the elusive preacher who rode them to the top.”


“Historian Debby Applegate’s The Most Famous Man in America is a brilliantly written, judicious, monumental biography of Henry Ward Beecher.  The amount of new research material she unearthed is stunning.  Chalk it up as a classic.”

— Douglas Brinkley, presidential biographer and author of The Great Deluge

“Debby Applegate brings to life 19th-century America’s most influential preacher, who emerges in this full-blooded portrait as a fascinating tangle of all-too-human traits.  Drawing off an impressive body of research, the author expertly weaves together biography and history in a riveting narrative that reads like a page-turning novel.”


“The title is not misleading.  Thoroughly researched, passionately written, and richly detailed, this book is the biography of America’s greatest nineteenth-century preacher, Henry Ward Beecher.  Through Applegate’s discerning eye, the moral strengths and sexual vulnerabilities of the ‘most famous man in America’ come clearly into view.  In the process, Applegate tells the larger story of nineteenth-century America’s religious transition from a Puritan and theocratic past to a ‘modern’ liberal orthodoxy premised on happiness, love, and the banishment of original sin.  Applegate’s biography is must reading for serious nonfiction readers of American religion, politics, and culture in Victorian America.”

— Harry S. Stout, Jonathan Edwards Professor of American Religious History, Yale University, author of Upon the Altar of the Nation: A Moral History of the Civil War

“Beautifully written…An exceptionally thorough and thoughtful account of a spectacular career that helped shape and reflect national preoccupations before, during and after the Civil War.”
— Kirkus Reviews (starred review)