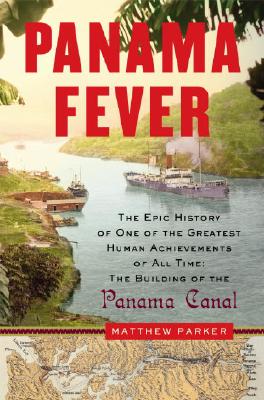 A thrilling tale of exploration, conquest, money, politics, and medicine

The Panama Canal was the costliest undertaking in human history. It literally required moving mountains, breaking the back of the great range that connects North and South America. Begun by the French in 1880, its successful completion in 1914 by the Americans marked the end of the Victorian Age and the beginning of the “American Century.”

The building of the Panama Canal was a project whose gestation spanned hundreds of years. Columbus himself searched for a way to get to the Pacific across the narrow isthmus of Central America. For centuries, monarchs, presidents, businessmen, and explorers all struggled to find such a passage, knowing that whoever controlled it would exert unsurpassed control over global trade, and therefore the fate of nations.

The first history of this mighty achievement in nearly thirty years, Panama Fever draws on diaries, memoirs, letters, and other contemporary accounts, bringing the experience of those who built the canal vividly to life. The massive project riveted public attention: “Panama Fever” spread throughout the Western world. Politicians and businessmen engaged in high-stakes international diplomacy in order to influence its location, path, ownership, and construction. Meanwhile, ditch-diggers, machinists, drivers, engineers, and foremen from all over the world rushed to take advantage of high wages and the chance to be a part of history.

But the grim reality of Panama – searing heat, torrential rains, fatal mud slides, and malarial mosquitoes – soon caught up with them. More than 25,000 of those who enthusiastically signed on as workers succumbed to dysentery, yellow fever, and malaria, giving a fatal twist to the meaning of “Panama Fever.” The truly horrific toll unleashed a second race to find a cure so the canal could be completed. The discoveries of the heroic doctors who battled these diseases would lead to a sea change in the way infectious diseases were treated, thus paving the way for the tremendous medical advances of the twentieth century.

Filled with remarkable characters, including Teddy Roosevelt, Ulysses S. Grant, and Ferdinand de Lesseps, the French genius who built the Suez Canal and almost snatched Panama out from under American control, Panama Fever is an epic historical adventure that shows how a small but fiercely contested strip of land in a largely unknown Central American nation suddenly made the world a smaller place and launched the era of American global dominance.

Praise For Panama Fever: The Epic Story of One of the Greatest Human Achievements of All Time-- the Building of the Panama Canal…

“Few great feats of engineering have been steeped in as much passion and tragedy as the Panama Canal, and no one tells the story better than Matthew Parker. Through meticulous research and vivid, vigorous prose, Parker has captured the frenzy surrounding the canal and the heartbreaking toll that it took on the thousands of men who set off like soldiers to Panama’s ‘Fever Coast,’ never to return.”
- Candice Millard, author of The River of Doubt: Theodore Roosevelt’s Darkest Journey

“[An] engrossing narrative of what Theodore Roosevelt called ‘one of the great works of the world.’”

Most Americans' knowledge of the Panama Canal was acquired in a haze of junior high school history -- somewhere alongside "trust busting" and the "bully pulpit" in the unit on Teddy Roosevelt and turn-of-the-century American confidence.

There was a spasm of interest in the canal 31 years ago, when the United States agreed to turn it -- along with the surrounding territory -- over to Panama, and also a flicker of notice in 1999 when the actual handover occurred. Beyond that, it's been pretty much out of sight, out of mind -- except on the political fringes, where some have tried to argue that Sen. John McCain's birth in the Canal Zone disqualifies him from seeking the presidency.

Fortunately, the Central American-born and British-educated author Matthew Parker missed out on the standard-issue, stultifying American tutorial. And, thus, we have his book "Panama Fever," which is not only an absolutely gripping account of the canal's conception and construction but also notice that a brilliant new popular historian has arrived on the scene.

"Popular," in this sense, means readable and committed to narrative storytelling, which Parker most assuredly is. He also happens to be an author of wide-ranging intelligence and deep humanity -- two qualities that don't always go hand-in-hand -- which makes "Panama Fever" much more than its rather relentless subtitle would suggest: "The Epic Story of One of the Greatest Human Achievements of All Time -- the Building of the Panama Canal."

In fact, the essence of Parker's rather remarkable achievement in this altogether entertaining history is to show just how much more than an engineering triumph the construction of the canal really was -- and, indeed, continues to be. Certainly, even in this era of so-called super-ships that are too large to use its locks, the canal remains a vital economic link. Nearly 1 million ships have traversed it since it opened 93 years ago, and today fully 5% of all the world's seagoing commerce and 12% of all American shipping still moves through the canal. The waterway is key to the booming trade between the U.S. and China, now the canal's top users.

There's a lovely symmetry in those statistics, because one of the things Parker's history makes clear is that the canal's origins extend back to the very beginnings of Spanish exploration of the New World, an undertaking that was all about gaining access to the riches of Asia. Even though the plunder of the Americas intervened, nobody ever quite lost sight of what might be gained if a southern passage to the East might be discovered -- or constructed. Indeed, when the Spanish conquistador Vasco Nuñez de Balboa first traversed the Darien jungle from the east, mounted a small hill and glimpsed the Pacific on one side and the Atlantic on the other, "he fell to his knees in prayer and then called up his men, 'shewing them the great maine sea heretofore unbeknowne to the inhabitants of Europe, Aphrike, and Asia.' "

Balboa sent gold and pearls home to royal Spain, along with a report that "included, rather as an afterthought, the musing of a Castilian engineer, Alvaro de Saavedra -- a suggestion that, although the search for a strait between the two oceans should continue, if it was not found, 'yet it might not be impossible to make one.' " Less than four decades later, in 1551, Father Francisco López de Gómara would write to King Charles V, the first head of state to entertain seriously the possibility of a canal: "If there are mountains there are also hands. . . . To a King of Spain with the wealth of the Indies at his command, when the object to be attained is the spice trade, what is impossible is easy."

Not easy, but difficult -- and costly -- beyond imagination. One of the fine things about Parker's history is its vivid evocation of the imaginations stirred by the dream of a man-made southern passage into the Pacific. Benjamin Franklin, Thomas Jefferson and Ulysses S. Grant were dreamers of the (by then) antique dream, as was the celebrated German explorer Alexander von Humboldt, who identified no less than "five possible Central American routes for a trans-Isthmian canal."

The first to attempt a realization of the dream was the Frenchman, Ferdinand de Lesseps, builder of the Suez Canal. He was neither an engineer nor much of a builder, but he had a genius for raising money; and the collapse of his enterprise was, at the time, the largest loss in the history of the European capital markets. (The canal had a way of sucking up money. As Parker writes, a Scottish attempt to establish a cross-Isthmus trade colony resulted in the loss of the entire nation's liquid capital, hastening union with England.)

Lesseps' attempt to dig a canal failed because of his insistence that it was possible to construct a sea-level crossing of Panama. The American effort would succeed, in part, as Parker demonstrates, because it accepted the reality of Panama's geography and settled on a crossing that is essentially two sets of locks at either end of a man-made lake.

It's a brilliantly realistic engineering solution, but one that was executed at immense human costs. Calculating those flesh-and-blood tariffs on Theodore Roosevelt's imperial ambitions is one of Parker's great strengths as a historian. The canal's 10 years of construction cost the United States $400 million, which meant that it wasn't until the 1950s that the enterprise showed a monetary profit. That's chump change compared to the human toll -- conservatively estimated at 250,000 lives, or 5,000 dead for every mile of canal.

Most of those dead were black workers from Jamaica and Barbados, and it is a particular strength of Parker's history that he draws on their letters and diaries for firsthand accounts of what it meant to undertake such a physically dangerous project in one of the world's most hostile environments, a place infested with diseases such as malaria and yellow fever. Indeed, the U.S. effort succeeded where the French failed not only because of public financing and superior technology but also because of an epic medical/scientific defeat of tropical diseases.

This is exemplary history, vigorously told with a respect for complexity that enriches rather than obscures the pleasure of a great story.