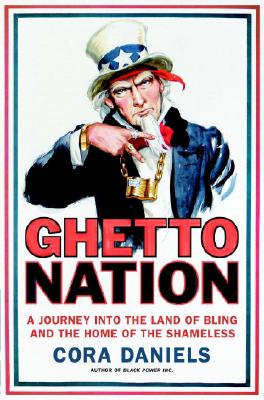 n. (Merriam-Webster dictionary) Italian, from Venetian dialect ghèto island where Jews were forced to live; literally, foundry (located on the island), from ghetàr, to cast; from Latin jactare to throw
1: a quarter of a city in which Jews were formerly required to live
2:
a quarter of a city in which members of a minority group live, especially because of social, legal, or economic pressure
3a:
an isolated group &lt;a geriatric ghetto&gt; b: a situation that resembles a ghetto especially in conferring inferior status or limiting opportunity &lt;stuck in daytime TV’s ghetto&gt;

ghet-to adj. (twenty-first-century everyday parlance)
1a: behavior that makes you want to say “Huh?” b: actions that seem to go against basic home training and common sense
2: used to describe something with inferior status or limited opportunity. Usually used with “so.” &lt;That’s so ghetto&gt; ; &lt;He’s so ghetto&gt;
3: a quarter of a city in which members of a minority group live, especially because of social, legal, or economic pressure.
4: common misusage: authentic, Black, keepin’ it real

As current and all-consuming as “ghetto” is in these days of gold teeth, weaves (blond and red), Pepsi-filled baby bottles, and babymamas, ghetto has a long history. The original ghetto was in the Jewish quarter of Venice, a Catholic city. Before it became the Jewish quarter, this area contained an iron foundry or ghèto, hence the name. These days, ghetto no longer refers to where you live, but to how you live. It is a mindset, and not limited to a class or a race. Some things are worth repeating: ghetto is not limited to a class or a race. Ghetto is found in the heart of the nation’s inner cities as well as the heart of the nation’s most cherished suburbs; among those too young to understand (we hope) and those old enough to know better; in little white houses, and all the way to the White House; in corporate corridors, Ivy League havens, and, of course, Hollywood. More devastating, ghetto is also packaged in the form of music, TV, books, and movies, and then sold around the world. Bottom line: ghetto is contagious, and no one is immune, no matter how much we like to suck our teeth and shake our heads at what we think is only happening someplace else…

From an award-winning journalist and cultural commentator comes a provocative examination of the impact of “ghetto” mores, attitudes, and lifestyles on urban communities and American culture in general.

Cora Daniels takes on one of the most explosive issues in our country today in this thoughtful critique of America’s embrace of a ghetto persona that demeans women, devalues education, celebrates the worst African American stereotypes, and contributes to the destruction of civil peace. Her investigation exposes the central role of corporate America in exploiting the idea of ghetto-ness as a hip cultural idiom, despite its disturbing ramifications, as a means of making money. She showcases Black rappers raised in privileged families who have taken on the ghetto persona and sold millions of albums, and non-Black celebrities, such as Paris Hilton, who have adopted ghetto attitudes and styles in pursuit of attention and notoriety. She explores, as well, her own relationship to the ghetto and the ways in which she is both part of and outside the Ghettonation.

Infused with humor and entertaining asides—including lists of events and people that the author nominates for the Ghetto Hall of Fame, and a short section written entirely in ghetto slang—Ghettonation is a timely and engrossing report on a controversial social phenomenon. Like Bill Cosby’s infamous, much-discussed comments about the problems within the Black community today, it is sure to trigger widespread interest and heated debate.


Praise For Ghettonation: A Journey Into the Land of Bling and Home of the Shameless…

“With wit and wisdom, [Daniels] explores and exposes the ghetto ‘mindset’ that demeans women, devalues education, ridicules proper English, celebrates criminality, discards traditional parenthood, and celebrates tacky fashion. Yet Ms. Daniels writes with an undertone of love. She softens the inevitable ‘elitist’ label that some critics have pinned on Bill Cosby by spreading the blame. At a time of great national argument over who is to blame for poverty, racism, or bad habits, Ms. Daniels reveals that society can be blamed.” —Clarence Page, Baltimore Sun


“Daniels widens the scope in a way that is blunt, personal, and challenging.” —Entertainment Weekly

“Daniels’s is a sobering critique that should be understood by every American.” —Steve Goddard’s History Wire


“Rather brilliantly, what [Daniels] describes as ‘ghetto’ behavior and thought is not color-coded . . . That such a brave and unflinching book could be written by a black woman in this time is quite inspiring.” —Stanley Crouch, New York Daily News