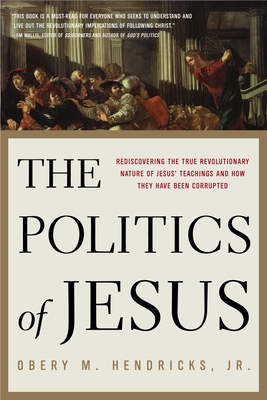 The Politics of Jesus (Paperback)

Who was Jesus? And how was this first-century political revolutionary, whose teachings are meant to lead the way to freedom, turned into a meek and mild servant of the status quo? How is it possible to profess a belief in Jesus, yet ignore the suffering of the poor and the needy? Just how truly faithful to the vision of Jesus are the many politicians who claim to be Christian? These are the kinds of questions Obery Hendricks, a biblical scholar, activist, and minister, asks in this provocative new book. In this day and age of heated political debate, Hendricks’s The Politics of Jesus stands out as much for its brilliant re-creation of the life and mind of Jesus of Nazareth as for its scathing critique of modern politicians “of faith.”

Praise For The Politics of Jesus: Rediscovering the True Revolutionary Nature of Jesus' Teachings and How They Have Been Corrupted…

“The Politics of Jesus joins John Danforth’s Faith and Politics and Jim Wallis’s God’s Politics as essential reading for Americans trying to move beyond the corrosive standoff between the religious right and the secular left.” —Washington Post

“In The Politics of Jesus, Obery Hendricks articulates a critical prophetic message that interrogates our nation’s politics according to the values of Jesus. With stunning clarity he offers powerful new insights. This book is a must-read for everyone who seeks to understand and live out the revolutionary implications of following Christ.” —Jim Wallis, editor of Sojourners and author of God’s Politics

“This book is a grand prophetic work—courageous in its message, meticulous in its scholarship, and relevant in its challenge to our sleepwalking times. Hendricks recasts the prevailing view of the meek and mild Jesus in a powerful and persuasive way.” —Cornel West, University Professor of Religion, Princeton University

“The Politics of Jesus is an instant classic—a book of stunning erudition, remarkable eloquence, and political courage. But more than that, Hendricks gives us a pioneering account of the revolutionary Jesus that has rarely been as systematically expounded, or as theologically sophisticated, as this monumental work provides. The Politics of Jesus immediately thrusts Obery Hendricks, Jr., to the front ranks of American religious thinkers.” —Michael Eric Dyson, author of Pride: The Seven Deadly Sins