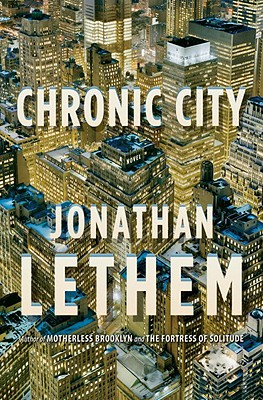 The acclaimed author of Motherless Brooklyn and The Fortress of Solitude returns with a roar with this gorgeous, searing portrayal of Manhattanites wrapped in their own delusions, desires, and lies.

Chase Insteadman, a handsome, inoffensive fixture on Manhattan's social scene, lives off residuals earned as a child star on a beloved sitcom called Martyr & Pesty. Chase owes his current social cachet to an ongoing tragedy much covered in the tabloids: His teenage sweetheart and fiancée, Janice Trumbull, is trapped by a layer of low-orbit mines on the International Space Station, from which she sends him rapturous and heartbreaking love letters. Like Janice, Chase is adrift, she in Earth's stratosphere, he in a vague routine punctuated by Upper East Side dinner parties.

Into Chase's cloistered city enters Perkus Tooth, a wall-eyed free-range pop critic whose soaring conspiratorial riffs are fueled by high-grade marijuana, mammoth cheeseburgers, and a desperate ache for meaning. Perkus's countercultural savvy and voracious paranoia draw Chase into another Manhattan, where questions of what is real, what is fake, and who is complicit take on a life-shattering urgency. Along with Oona Laszlo, a self-loathing ghostwriter, and Richard Abneg, a hero of the Tompkins Square Park riot now working as a fixer for the billionaire mayor, Chase and Perkus attempt to unearth the answers to several mysteries that seem to offer that rarest of artifacts on an island where everything can be bought: Truth.

Like Manhattan itself, Jonathan Lethem's masterpiece is beautiful and tawdry, tragic and forgiving, devastating and antic, a stand-in for the whole world and a place utterly unique.

"Astonishing....Knowing and exuberant, with beautiful drunken sentences that somehow manage to walk a straight line.....Turbocharged....Intricate and seamless....A dancing showgirl of a novel, yet beneath the gaudy makeup it's also the girl next door: a traditional bildungsroman with a strong moral compass...." New York Times Book Review

"Chronic City is a feverish portrait of the anxiety and isolation of modern Manhattan, full of dark humor and dazzling writing....proves both funny and frightening."--Entertainment Weekly

"Exuberant literary revving.....Lethem's vision of New York can approach the Swiftian. It is impressively observant in its detail and scourging in its mocking satire. There are any number of wicked portraits....His comments on New York life are often achingly exact....So pungent and imaginative"--The Boston Globe

"Ingenious and unsettling...Lethem pulls everything together in a stunning critique of our perceptions of reality and our preconceptions of the function of literature."--San Francisco Chronicle

"Exquisitely written...Funny and mystifying, eminently quotable, resolutely difficult, even heartbreaking, "Chronic City" demonstrates an imaginative breadth not quite of this world."--Cleveland Plain Dealer

"A fluid sense of reality pervades these pages, which explore high society, urban politics, avant-garde art, celebrity mania and the dangers of information overload in an age where context is devalued or ignored....the quality of Lethem's prose and the exuberance of his imagination are reasons enough to read it.....When it comes to style, Lethem has few equals."--Miami Herald

"The novel functions much like Manhattan used to – a mad scramble of connections made and, more often, missed…make(s) a reader ache for a city long gone." – Esquire

"Entertaining....a prosopographical investigation of New York City by way of a handful of strange, unclassifiable characters (and some remarkable writing)....splendidly observed"--Wall Street Journal

"Brilliant....exquisite wit and dazzling intricacy of every single paragraph......roves he's one of the most elegant stylists in the country, and he's capable of spinning surreal scenes that are equal parts noir and comedy.... evocative and engaging....As a reflection on modern alienation and the chronic loneliness that afflicts us in our faux world, this is beautifully, often powerfully done."--The Washington Post

"A sprawling book about pop culture and outer space…realistic and fantastic, serious and funny, warm and clear eyed. One of the new generation's most ambitious writers, Lethem again offers a novel that deals with nothing less important than the difference between truth and lies. And some stories about good cheeseburgers." - The Daily Beast

"Lethem has often sought to interweave the realistic and the fantastic; in Chronic City the result is nearly seamless." - New York Magazine

"[Lethem is] a writer who resists pigeonholing....it's hard to remain unsusceptible to his euphoria"--Los Angeles Times


"One of America's finest novelists explores the disconnections among art, government, space travel and parallel realities, as his characters hunger for elusive meaning…… All truths and realities are open to interpretation, even negotiation, in this brilliantly rich novel….Lethem's most ambitious work to date."
—Kirkus Reviews, starred

"Pow! Letham has done it again. When it comes to brainy adventures full of laughter and heart this master has few equals. What a joy from the first page to the last."
—Gary Shteyngart, author of Absurdistan and The Russian Debutante's Handbook

"I'm reminded of the well-rubbed Kafka line re: A book must be the axe to break the frozen sea within us. Lethem's book, with incredible fury, aspires to do little less. It's almost certainly his best novel. It's genuinely great."
–David Shields, author of The Thing About Life Is That One Day You'll Be Dead
</div>

JONATHAN LETHEM is the author of seven novels. A recipient of the MacArthur Fellowship, Lethem has also published his stories and essays in "The New Yorker," "Harper's," "Rolling Stone," "Esquire," and the "New York Times," among others.

When do you think the action of the novel occurs? Is there a reason the time was left vague? Is this the “real” New York City?

At what point did you begin to suspect that Chase Insteadman was living a fiction? At what point in their story do you think Perkus Tooth understood that Chase had been deceived about his role?

Can you accept that Oona Laszlo is responsible for the letters attributed to Janice Trumbull? Is it possible, as a writer, to create another human being more generous, large-hearted, and responsive than yourself?

What is the meaning of the wild animals that intrude on the lives of these Manhattanites — the eagles, the tiger? Do they have anything to do with the weather?

Have you ever felt that the place where you lived or grew up was being turned into a ‘simulacrum’ of itself?

Have you ever tried to care for someone impossible? Are you now? Does Perkus Tooth remind you of anyone in your own life, or did you find Chase’s decision to befriend him misguided?

At different points in Chronic City, Perkus Tooth seems to attempt to sustain himself completely on culture and language, then, alternately, to try to leave culture and language entirely behind and live a “pure” life. Do you think either approach is possible?

The author’s working title for Chronic City was “Manhattan“. The Woody Allen film by that name was often criticized for depicting a Manhattan consisting only of the white upper middle class. Is Chronic City self-aware about the limitations of its characters? Does Chase Insteadman’s response to the black kids he meets near the Urban Fjord, or to the black man in the jail cell imply another version of Manhattan creeping into view?

What does the gray fog hide?

Was Chase unfair to Oona? Should he give her another chance?