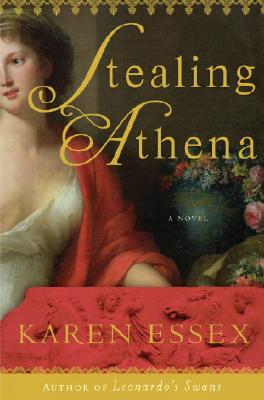 The author of the bestselling Leonardo’s Swans traverses the centuries into the hearts of two extraordinary women to reveal the passions, ambitions, and controversies surrounding the Elgin Marbles.

The Elgin Marbles have been displayed in the British Museum for nearly two hundred years, and for just as long they have been the center of a raging controversy. In Stealing Athena, Karen Essex chronicles the Marbles’ amazing journey through the dynamic narratives of Mary Nisbet, wife of the Earl of Elgin, the British ambassador to Constantinople, and Aspasia, the mistress of Perikles, the most powerful man in Athens during that city’s Golden Age.
At the height of the Napoleonic Wars, the twenty-one-year-old, newly wed Countess of Elgin, a Scottish heiress and celebrated beauty, enchanted the power brokers of the Ottoman Empire, using her charms to obtain their permission for her husband’s audacious plan to deconstruct the Parthenon and bring its magnificent sculptures to England. Two millennia earlier, Aspasia, a female philosopher and courtesan, and a central figure in Athenian life, plied her wits, allure, and influence with equal determination, standing with Perikles at the center of vehement opposition to his vision of building the most exquisite monuments the world had ever seen.
Rich in romance and intrigue, greed and glory, Stealing Athena is an enthralling work of historical fiction and a window into the intimate lives of some of history’s most influential and fascinating women.

"A great adventure story. . . . Essex delves deeply into the lives and times of her characters in settings as diverse as ancient Greece and 18th-century Constantinople, France and Great Britain, and her women characters are spirited and memorable.”
—The Times-Picayune

"Stealing Athena expounds on the weight of the past, the power of art, and the strength of women who exercised free will even when they had the fewest rights…. Uniquely relevant."
—Los Angeles Times

What were your initial impressions of Mary and Lord Elgin’s relationship in the opening scenes of Stealing Athena? How do the dynamics of the relationship change as the novel progresses?

Discuss the significance of Sir William’s giving Mary the copy of Plutarch’s Life of Pericles in the beginning of the novel. How does this relate to Mary’s understanding of Emma Hamilton, Aspasia, and the varying roles of women in society?

How was your reading enhanced when the narration switched from third person, in the more modern scenes with Lord Elgin and Mary, to first person, when Essex introduces Aspasia and the world of ancient Athens? How does this shape your understanding of the characters in Stealing Athena?

How would you characterize the relationship between Mary and her parents? How does the fact that Mary is their only child impact that relationship? Is this ultimately beneficial or detrimental to Mary?

Discuss the recurring theme of diplomacy and how it relates to Mary and Lord Elgin as well as Aspasia and Pericles. How does the notion of being a foreigner relate with this theme?

How do Mary’s relationships with the various men in her life come to define her as a person? In particular, discuss her relationships with Lord Elgin, the Pasha, the Sultan, and Robert Ferguson. What is significant about the way she relates to men?

Discuss the relevance of the title, Stealing Athena, as it relates to both time periods covered in the novel. Which characters seem to embody the title the most?

How does Aspasia represent freedom and oppression simultaneously? How does Mary mirror this in her own situation? Whose social status would you rather experience–Aspasia’s or Mary’s?

How does the issue of personal wealth play a role in the plot concerning Mary and Lord Elgin? In what ways do financial issues connect Lord Elgin and Pericles?

What do Mary and Aspasia’s dreams represent in the context of their individual stories? How do their visions compare to your perception of the world?

Describe the differing views of pregnancy as it relates to both Aspasia and Mary. How is pregnancy both a blessing and a curse for them? What does this imply about the societies in which each woman exists?

How does the theme of nationalism play an increasingly larger role as the novel progresses? Discuss this as it relates especially to Lord Elgin, Pericles, and Napoleon. How is each man’s sense of self related to his national identity?

Discuss the consequences of the trials on both Aspasia and Mary. How do both women handle the scrutiny of the public eye?

Discuss the prevailing theme of Greek legendry. How does the interplay of folklore and Christianity set a tone throughout Stealing Athena? What is the significance of the curse of Athena throughout the novel?

What was your reaction to the closing passage, titled “The Fates of Our Characters”? In what way did the addendum enhance your understanding of the novel’s historical context?

How do the imagery, characterizations, and themes of Stealing Athena relate to those in other Karen Essex novels you have read? What new ideas or concepts does Essex introduce in this work?