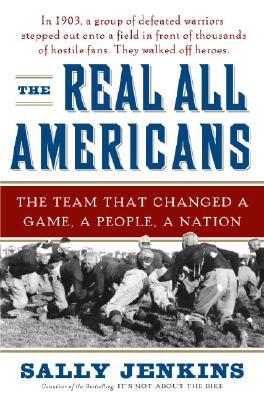 The Real All Americans (Hardcover)

The Team That Changed a Game, a People, a Nation

Sally Jenkins, bestselling co-author of It's Not About the Bike, revives a forgotten piece of history in The Real All Americans. In doing so, she has crafted a truly inspirational story about a Native American football team that is as much about football as Lance Armstrong's book was about a bike.

If you’d guess that Yale or Harvard ruled the college gridiron in 1911 and 1912, you’d be wrong. The most popular team belonged to an institution called the Carlisle Indian Industrial School. Its story begins with Lt. Col. Richard Henry Pratt, a fierce abolitionist who believed that Native Americans deserved a place in American society. In 1879, Pratt made a treacherous journey to the Dakota Territory to recruit Carlisle’s first students.

Years later, three students approached Pratt with the notion of forming a football team. Pratt liked the idea, and in less than twenty years the Carlisle football team was defeating their Ivy League opponents and in the process changing the way the game was played.

Sally Jenkins gives this story of unlikely champions a breathtaking immediacy. We see the legendary Jim Thorpe kicking a winning field goal, watch an injured Dwight D. Eisenhower limping off the field, and follow the glorious rise of Coach Glenn “Pop” Warner as well as his unexpected fall from grace.

The Real All Americans is about the end of a culture and the birth of a game that has thrilled Americans for generations. It is an inspiring reminder of the extraordinary things that can be achieved when we set aside our differences and embrace a common purpose.

Praise For The Real All Americans: The Team That Changed a Game, a People, a Nation…

Praise for THE REAL ALL AMERICANS:


“The most fascinating piece of sports history ever written!”
—Lance Armstrong

“This is historical sports-writing at its finest. Populated with all-stars like Jim Thorpe and Dwight Eisenhower but also with many captivating lesser-knowns, The Real All Americans brings a single historic game to life on the page—and in doing so captures a brutal clash of cultures still raw from the frontier. Sally Jenkins' stirring narrative belongs on a shelf with Seabiscuit and The Greatest Game Ever Played.”
—Hampton Sides, author of Blood and Thunder and Ghost Soldiers

“Part of being a truly great reporter is recognizing a truly compelling story that everyone else has somehow missed. In The Real All Americans, Sally Jenkins has done just that. Add her superb writing to the mix and you have a book that must be read and savored.”—John Feinstein, author of Season on the Brink and Vanishing Act: Mystery at the U.S. Open

“Oh, my, why hasn't this book been written before? The saga of the Carlisle Indians is pure Americana: the ultimate underdogs triumphing against the snootiest establishment, a small and satisfying slice of redemption found on the football field for a pile of injustices that began just about the time the first Pilgrims disembarked at Plymouth Rock. Sally Jenkins not only has found a great story, but tells it impeccably. Buckle up your leather helmet and enjoy the ride.”—Leigh Montville, author of The Big Bam