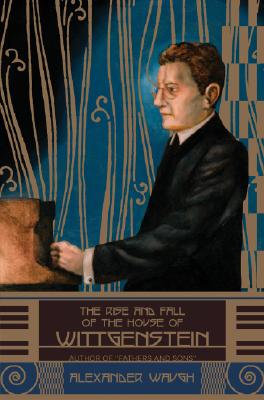 The House of Wittgenstein (Hardcover)

A Family at War

From Alexander Waugh, the author of the acclaimed memoir Fathers and Sons, comes a grand saga of a brilliant and tragic Viennese family.

The Wittgenstein family was one of the richest, most talented, and most eccentric in European history. Karl Wittgenstein, who ran away from home as a wayward and rebellious youth, returned to his native Vienna to make a fortune in the iron and steel industries. He bought factories and paintings and palaces, but the domineering and overbearing influence he exerted over his eight children resulted in a generation of siblings fraught by inner antagonisms and nervous tension. Three of his sons committed suicide; Paul, the fourth, became a world-famous concert pianist, using only his left hand and playing compositions commissioned from Ravel and Prokofiev; while Ludwig, the youngest, is now regarded as one of the greatest philosophers of the twentieth century. In this dramatic historical and psychological epic, Alexander Waugh traces the triumphs and vicissitudes of a family held together by a fanatical love of music yet torn apart by money, madness, conflicts of loyalty, and the cataclysmic upheaval of two world wars. Through the bleak despair of a Siberian prison camp and the terror of a Gestapo interrogation room, one courageous and unlikely hero emerges from the rubble of the house of Wittgenstein in the figure of Paul, an extraordinary testament to the indomitable spirit of human survival.

Alexander Waugh tells this saga of baroque family unhappiness and perseverance against incredible odds with a novelistic richness to rival Thomas Mann’s Buddenbrooks.

ALEXANDER WAUGH is the grandson of Evelyn Waugh and the son of columnist Auberon Waugh. He has written several books, including "Classical Music: A New Way of Listening," "Time," ""and "God."""He lives in Somerset, England, with his wife and three children.

Praise For The House of Wittgenstein: A Family at War…

Praise from Britain for The House of Wittgenstein

“The story in this book is so gripping and fascinating that it is remarkable that it has never been told in this way before. It is probably just as well, for it is hard to imagine another account showing such fluency, wit and attention to detail as Alexander Waugh’s.” —Simon Heffer, Literary Review


“[A] diligently researched history of the Wittgenstein family . . . it will attract . . . readers because of its utterly absorbing account of the military, musical and personal heroics of Paul Wittgenstein.”—Ray Monk, Standpoint

“Waugh has done a masterly job, untangling a mass of financial and psychological complexities, while never over-encumbering the central, personal stories. His writing is brisk, confident and colourful . . . and the book is a pleasure to read.”
—Noel Malcolm, Telegraph

“Marvellous, a sharp combination of some formidable scholarship . . . with a wonderful eye for absurdity . . . a magnificently refreshing and invigorating volume which deserves a wide readership.” —Frank McLynn, The Independent


Praise for Fathers and Sons

“[Alexander Waugh] has created a vivid, Dickensian portrait of his eccentric relatives, and he’s done so with enormous irreverence and élan.”
—Michiko Kakutani, New York Times

“Witty, in the Waugh manner, but it is also poignant.” —Joan Acocella, The New Yorker

A work of real discovery and rollicking narrative. This is a memorable biography, not to be missed.” —Norman Lebrecht, London Evening Standard