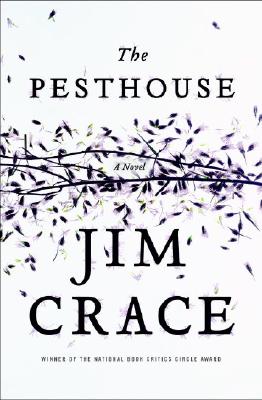 Jim Crace is a writer of spectacular originality and a command of language that moves a reader effortlessly into the world of his imagination. In The Pesthouse he imagines an America of the future where a man and a woman trek across a devastated and dangerous landscape, finding strength in each other and an unexpected love.

Once the safest, most prosperous place on earth, the United States is now a lawless, scantly populated wasteland. The machines have stopped. The government has collapsed. Farmlands lie fallow and the soil is contaminated by toxins. Across the country, families have packed up their belongings to travel eastward toward the one hope left: passage on a ship to Europe.

Franklin Lopez and his brother, Jackson, are only days away from the ocean when Franklin, nearly crippled by an inflamed knee, is forced to stop. In the woods near his temporary refuge, Franklin comes upon an isolated stone building. Inside he finds Margaret, a woman with a deadly infection and confined to the Pesthouse to sweat out her fever. Tentatively, the two join forces and make their way through the ruins of old America. Confronted by bandits rounding up men for slavery, finding refuge in the Ark, a religious community that makes bizarre demands on those they shelter, Franklin and Margaret find their wariness of each other replaced by deep trust and an intimacy neither one has ever experienced before.

The Pesthouse is Jim Crace’s most compelling novel to date. Rich in its understanding of America’s history and ethos, it is a paean to the human spirit.


Praise For The Pesthouse…

“Crace is one of Britain’s most remarkable writers.”
—Richard Eder, The New York Times

“One will watch with eagerness, and bated breath, the progress of this strong, inventive, and above all courageous novelist.”
—John Banville, The New York Review of Books

“[Crace] has always exhibited an uncanny gift for tapping into the horrors that wake us, heart pounding, in the middle of the night. He is fascinated by the extremes of existence, and he knows our demons by name…. It’s a tribute to Crace’s skill that we so rapidly get our bearings in [The Pesthouse’s] radically altered landscape…. Crace can write amazingly well…. When he’s on…he’s stellar.”
–Francine Prose, The New York Times Book Review

“[Crace’s] characters beguile readers with their emotional authenticity and detailed psychologies. His prose carries the contours of a Donatello sculpture as Crace chisels gracefully flowing sentences with eloquence, precision and the occasional cheeky hint of the impish.”
–San Francisco Chronicle

“Jim Crace is a writer about plain things, but he writes about them in a way that’s both startling and subtle, a shimmering surface over still depths.”
–Washington Post Book World

"At one level, The Pesthouse is a suspenseful road novel...but at its heart, it is a meditation on deep questions about America: the costs of relentless expansion, the fate of a wasteful industrial society."
–Los Angeles Times

“The Pesthouse is a moving tale, a tour de force of imagination and ingenuity, written in a language that even the best poets would admire.”
–World Literature Today

“Tumescence, finely suggested in the author’s stately, faintly archaic prose, pulses this strange story and stops the heart as no consummation would…. Mr. Crace is the coldest of writers, and the tenderest.”
–Richard Eder, The New York Times

“A powerful but subtly rendered novel about the choices people make when there seem to be no choices…. Issues of family (blood or formed), religious faith, fate and the refusal to submit to it enrich an engrossing novel that may be the richest and most ambitious of the renowned author’s career.”
–Kirkus Reviews (starred review)

“At its core, The Pesthouse is a love story, albeit one played out in a landscape of calamity. Indeed, in its own way, it is a tender book, quiet and interior, and exploration of the heart...”
–Bookforum