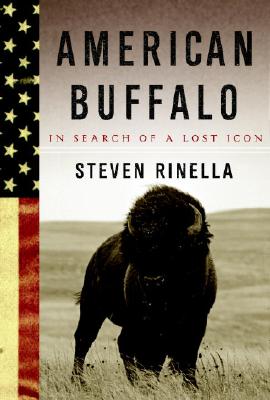 “American Buffalo is a fascinating, panoramic account of buffalo, their evolution, and the long history of their relationship with humans. Rinella's enthusiasm for his subject is evident as he skillfully juxtaposes his personal experience as a proficient and dedicated hunter with sections on archaeology and history, all accessibly and engagingly written.”
— Lynne Almeida, Spellbinder Bookshop, Bishop, CA
View the List

Praise For American Buffalo: In Search of a Lost Icon…

“This is some of the best writing on our great national beast since George Catlin–and that was in 1841. A real triumph.”
–Bill McKibben, author The Bill McKibben Reader

“This is a big-game hunting story like no other: Steven Rinella is in search of an animal, quite literally. But also historically, existentially, and maybe even spiritually. Follow him on this curious armed quest– and, like him, you will quickly find yourself immersed in the fate of our mightiest and most talismanic beast.”
–Hampton Sides, author of Blood and Thunder

“Steven Rinella’s American Buffalo is a boldly original and ultimately refreshing book. It is also fearsome and occasionally frightening, and one wonders if the author is quite mad. There are insights into nature and American history here that will be totally unfamiliar to the reader.”
–Jim Harrison, author of Returning to Earth and Legends of the Fall


“Steven Rinella goes places and does things the rest of us don’t, and that is something to be grateful for, because American Buffalo is like no other book you've ever read. It’s a gripping adventure story, a funny and moving memoir, and a flat-out fascinating biography of one of the most cherished and elusive figures in our national mythology. This book will make you see America with fresh eyes.”
–Benjamin Wallace, author of The Billionaire’s Vinegar

“Here is one of those rare books that make you feel larger, smarter, and entirely exhilarated for having read them. Steven Rinella's lens on the world is entirely his own, as is his grace on the page. American Buffalo is an achievement through and through.”
–Deirdre McNamer, author of Red Rover

“Moving and downright funny. . . Rinella writes with authority about the process of turning a living creature into steak, and easily renders an enormous amount of historical and scientific information into a thoroughly engaging narrative.”
–Publishers Weekly (starred review)

“Here is a wonderful young writer that everyone should know about. Steven Rinella is exciting, adventurous, technically gifted, honest, funny–a great new voice in American nonfiction.”
–Ian Frazier, author of Great Plains, On the Rez, and The Fish’s Eye