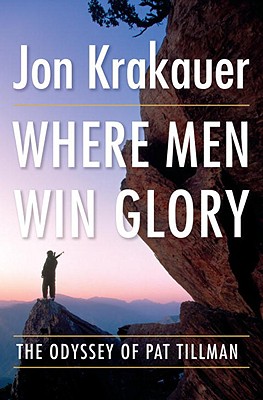 The bestselling author of Into the Wild, Into Thin Air, and Under the Banner of Heaven delivers a stunning, eloquent account of a remarkable young man’s haunting journey.

Like the men whose epic stories Jon Krakauer has told in his previous bestsellers, Pat Tillman was an irrepressible individualist and iconoclast. In May 2002, Tillman walked away from his $3.6 million NFL contract to enlist in the United States Army. He was deeply troubled by 9/11, and he felt a strong moral obligation to join the fight against al-Qaeda and the Taliban. Two years later, he died on a desolate hillside in southeastern Afghanistan.

Though obvious to most of the two dozen soldiers on the scene that a ranger in Tillman’s own platoon had fired the fatal shots, the Army aggressively maneuvered to keep this information from Tillman’s wife, other family members, and the American public for five weeks following his death. During this time, President Bush repeatedly invoked Tillman’s name to promote his administration’s foreign policy. Long after Tillman’s nationally televised memorial service, the Army grudgingly notified his closest relatives that he had “probably” been killed by friendly fire while it continued to dissemble about the details of his death and who was responsible.

In Where Men Win Glory, Jon Krakauer draws on Tillman’s journals and letters, interviews with his wife and friends, conversations with the soldiers who served alongside him, and extensive research on the ground in Afghanistan to render an intricate mosaic of this driven, complex, and uncommonly compelling figure as well as the definitive account of the events and actions that led to his death. Before he enlisted in the army, Tillman was familiar to sports aficionados as an undersized, overachieving Arizona Cardinals safety whose virtuosity in the defensive backfield was spellbinding. With his shoulder-length hair, outspoken views, and boundless intellectual curiosity, Tillman was considered a maverick. America was fascinated when he traded the bright lights and riches of the NFL for boot camp and a buzz cut. Sent first to Iraq—a war he would openly declare was “illegal as hell” —and eventually to Afghanistan, Tillman was driven by complicated, emotionally charged, sometimes contradictory notions of duty, honor, justice, patriotism, and masculine pride, and he was determined to serve his entire three-year commitment. But on April 22, 2004, his life would end in a barrage of bullets fired by his fellow soldiers.

Krakauer chronicles Tillman’s riveting, tragic odyssey in engrossing detail highlighting his remarkable character and personality while closely examining the murky, heartbreaking circumstances of his death. Infused with the power and authenticity readers have come to expect from Krakauer’s storytelling, Where Men Win Glory exposes shattering truths about men and war.

"Jon Krakauer has done his job well; Where Men Win Glory is a tough read...[He] has tackled a task that required the distillation and organization of volumes of disparate information.  That he has fielded a coherent narrative is a victory.  that he has made it compelling and passionate is a difficult blessing...In mining Tillman's life and death, Krakauer uncovers a story much more compelling than anything that could be spun." - The Denver Post

"Krakauer -- whose forenseic studies of the Emrsonian Man in books such as Into Thin Air and Into the Wild yield so much insight -- has turned in a beautiful bit of reporting, documenting Tillman's life with journals and interviews with those close to him...Must be counted as the definitive version of events surrounding Tillman's death." --The Los Angeles Times

"In this wrenching account of the life and eath of NFL star Pat Tillman, killed in friendly fire in Afghanistan in 2004, Krakauer brilliants turns investigative reporter...Krakauer will break your heart recounting how the military lied about Pat's death to his parents and fellow soldier Kevin." -- People

"In this masterful work, bestselling adventure writer Jon Krakauer renders an intimate portrait of Tillman and brilliantly captures the sadness, madness, and heroism of the post-9/11 world...Drawing on interviews with family, fellow soldiers and correspondence, Krakauer's page-turning account captures every detail -- Tillman's extraordinary character, including the "tragic vitures" that led him to give up a comfortable life and athletic stardom for the army; the harshness of military training and life; the rugged terrain of remote Afghanistan -- and, of course, the ravages of war.  Most critically, by telling Tillman's personal story and blowing apart the "cynical cover-up" that followed his killing, Krakauer lays bare the best -- and worst -- of America's War on Terror." -- Publisher's Weekly


"Where Men Win Glory, Jon Krakauer's narrative of pro football player Pat Tillman's "odyssey," as he calls it, from the playing field to the battlefield, is nuanced, thorough, and chilling...[He] is up to the task of telling this brave man's story...Krakauer's tone is somber and judicious as he reports this ludicrous hijacking of the truth and its shameful cover-up, but the anger behind it charges every word.  [He] has made sure that this shameful episode will not fade into obscurity and that Pat Tillman will be remembered for the man he truly was -- and not as the faux symbol of a failed policy." -- Portland Oregonian

"Tillman indeed was a fallen hero who, while alive, shunned all efforts to make him the poster boy of a global war against terrorism.  And Krakauer's gripping book about this extraordinary man who lived passionately and died unnecessarily sets the record straight." --USA Today

"On one level, Jon Krakauer's Where Men Win Glory represents a detailed look at the tragic tale of Pat Tillman, the football star who quit the NFL to enlist in the Army and was killed by friendly fire in Afghanistan.  But Krakauer's book is also an exhaustive examination of America's political and military involvement in Afghanistan and Iraq.  Krakauer documents an unsettling history of miscalculation and mismanagement, of tactical blunders, deliberate deceit, and stunning incompetence at the highest levels of leadership...It all makes for painful, infuriating, and required reading." --Boston Globe

"Where Men Win Glory will stand as one of the signal books of the wars in Iraq and Afghanistan, a grunt's-eye view to complement the macroscopic work of Dexter Filkins, Thomas E. Ricks, and George Packer." --Outside Magazine

"Krakauer's much anticipated, deeply reported, fascinating account of Tillman's lief, death, and afterlife as a political pawn in a failed government propaganda effort...is a page-turner worth any reader's time." --Boulder Daily Camera

JON KRAKAUER is the author of Eiger Dreams, Into the Wild, Into Thin Air, and Under the Banner of Heaven and is the editor of the Modern Library Exploration series.