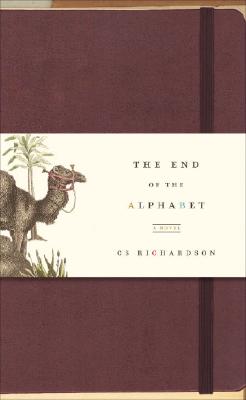 The End of The Alphabet (Hardcover)

THE END OF THE ALPHABET is a tender, intimate story of an ordinary life defined by an extraordinary love.
Ambrose Zephyr is a contented man. He shares a book-laden Victorian house with his loving wife, Zipper. He owns two suits, one of which he was married in. He is a courageous eater, save brussels sprouts. His knowledge of wine is vague and best defined as Napa, good; Australian, better; French, better still. Kir royale is his drink of occasion. For an Englishman he makes a poor cup of tea. He believes women are quantifiably wiser than men, and would never give Zipper the slightest reason to mistrust him or question his love. Zipper simply describes Ambrose as the only man she has ever loved. Without adjustment.
Then, just as he is turning fifty, Ambrose is told by his doctor that he has one month to live. Reeling from the news, he and Zipper embark on a whirlwind expedition to the places he has most loved or has always longed to visit, from A to Z, Amsterdam to Zanzibar. As they travel to Italian piazzas, Turkish baths, and other romantic destinations, all beautifully evoked by the author, Zipper struggles to deal with the grand unfairness of their circumstances as she buoys Ambrose with her gentle affection and humor. Meanwhile, Ambrose reflects on his life, one well lived, and comes to understand that death, like life, will be made bearable by the strength and grace of their devotion.
Richardson’s lovely prose comes alive with an honesty and intensity that will leave you breathless and inspired by the simple beauty and power of love. THE END OF THE ALPHABET is a timeless, resonant exploration of the nature of love, loss, and life.


Praise For The End of The Alphabet…

C S RICHARDSON has worked in publishing for more than twenty years. He has received the Alcuin Award (Canada’s highest honor for excellence in book design) several times, and lectures frequently on various facets of publishing, design, and communication. He lives in Toronto, Canada.

“An alphabet of the language of lovers, a beautiful fable of art and mortality: elegant, wise, and humane. I like to think of the happiness this book will bring. I’m sure it will be given as a gift between lovers, and will inspire many journeys—geographical and emotional.”
—Chris Cleave, author of Incendiary

The book opens with an epigraph by Elizabeth Bishop, excerpted from her poem “Questions of Travel”: “Think of the long trip home/ Should we have stayed at home and thought of here?/ Where should we be today?” What do you think of this choice for an epigraph? Why is it significant? Look up the original poem if you wish. Is CS Richardson influenced by other aspects of this poem?

CS Richardson has called this book “a fable, a parable on the notions of love and loss and relationships, and how far you would go in the name of love.” How does the tone of fable impact the way you receive the ideas contained in this book? Why do you think Richardson chose to tell this particular story with nuances of the fabulous?

The physical descriptions of Ambrose and Zipper are parallel in structure, with paragraphs devoted to their tastes in clothing, in music and literature, in food, and brief descriptions of their appearances and personalities. Why do you think Richardson chose to describe them in this way? Do you see other symmetries in the structure of this novel? What do they contribute to the experience of reading this book?

As “average” as everyone considers Ambrose to be, he has some exceptional qualities, including his ability to visualize history as though seeing through time. What does this instinct say about him, about his being and his desires? What does the revelation of his long-hidden list mean to Zipper?

Ambrose loves to walk, to experience his life through walking, referring to his favorite Paris route as his flânez and wearing a self-circumscribed path through his London neighbourhood. Does this give you any insight into Ambrose? Have you ever had a favorite flânez?

What lessons does Ambrose carry with him from the life, and death, of his father?

Ambrose is dying from an illness that is cloaked in mystery in every aspect save its fatality. Why do you think Richardson chose to leave the illness unnamed and vague?

A camel utters with equanimity some advice in Ambrose’s dream: “Why, you ask? There is no why, Master Zephyr. Life goes on. Death goes on. Love goes on. It is all as simple as that.” Discuss Ambrose’s dream. What does it reveal about the state of his mind and heart?

In chapter “Z,” why did Ambrose leave the list in Zipper’s book? Why that book? What is the gift of his message?

At the novel’s close, Zipper opens her notebook and writes, “This story is unlikely,” repeating the phrase that opens the novel. Why do you think Richardson chose to loop the book’s narrative in this way? Did it change your perspective on the preceding pages?

If Ambrose had not received this death sentence, how do you think his life with Zipper would have progressed? Where would they have been in 10 years?

If you were told you had 30 days left to live, what would you do?