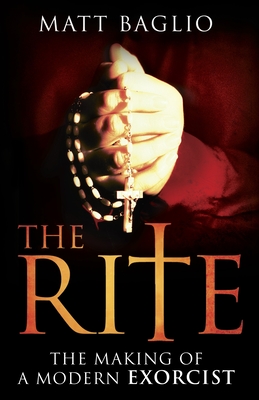 The Making of a Modern Exorcist

The inspiration for the film starring Anthony Hopkins, journalist Matt Baglio uses the astonishing story of one American priest's training as an exorcist to reveal that the phenomena of possession, demons, the Devil, and exorcism are not merely a remnant of the archaic past, but remain a fearsome power in many people's lives even today.

Father Gary Thomas was working as a parish priest in California when he was asked by his bishop to travel to Rome for training in the rite of exorcism. Though initially surprised, and slightly reluctant, he accepted this call, and enrolled in a new exorcism course at a Vatican-affiliated university, which taught him, among other things, how to distinguish between a genuine possession and mental illness. Eventually he would go on to participate in more than eighty exorcisms as an apprentice to a veteran Italian exorcist. His experiences profoundly changed the way he viewed the spiritual world, and as he moved from rational skeptic to practicing exorcist he came to understand the battle between good and evil in a whole new light. Journalist Matt Baglio had full access to Father Gary over the course of his training, and much of what he learned defies explanation.

The Rite provides fascinating vignettes from the lives of exorcists and people possessed by demons, including firsthand accounts of exorcists at work casting out demons, culminating in Father Gary's own confrontations with the Devil. Baglio also traces the history of exorcism, revealing its rites and rituals, explaining what the Catholic Church really teaches about demonic possession, and delving into such related topics as the hierarchy of angels and demons, satanic cults, black masses, curses, and the various theories used by modern scientists and anthropologists who seek to quantify such phenomena.

Written with an investigative eye that will captivate both skeptics and believers alike, The Rite shows that the truth about demonic possession is not only stranger than fiction, but also far more chilling.


Praise For The Rite: The Making of a Modern Exorcist…

Praise for The Rite

“There are chilling descriptions of exorcists battling demons in The Rite … Baglio has strong storytelling skills, and constructs a narrative that travels a long distance quickly."
– LA Times

“Matt Baglio’s book is a wake-up call. It smashes the many myths created by Hollywood movies and other amateurs on the subject about exorcism and the role of the exorcist in the Catholic Church.”
— Father Basil Cole, O.P., professor of moral and spiritual theology of the Pontifical Faculty at the Dominican House of Studies, Washington, D.C.

"Journalist Balgio follows a Catholic priest through the latter’ s training to become an exorcist in this incisive look at the church’s rite of exorcism and its use in contemporary life. Baglio began delving into the topic after hearing about a course at a Vatican-affiliated university, where he met and befriended the Rev. Gary Thomas, a priest in the diocese of San Jose, Calif. Thomas took the exorcism course at the request of his bishop and subsequently apprenticed himself to a seasoned exorcist. Keenly aware of the misunderstanding that abounds about exorcism through film images, Baglio sets about dispelling misconceptions and does so skillfully, separating the real from the imaginary in the mysterious and unsettling sphere of the demonic. Both Thomas and Baglio were changed by their exposure to the rite. Thomas grew spiritually during the process, which bolstered his desire to help his parishioners, and Baglio, previously a nominal Catholic, reconnected with his faith. For anyone seeking a serious and very human examination of this fascinating subject, one that surpasses the sensational, this is absorbing and enlightening reading."
— Publishers Weekly, starred review

"The Rite is in my opinion one of the best books ever written on the topic of exorcism. I have read very few books that give a description as appropriate, as precise, or as detailed, and the author's deep knowledge of the subject makes it a true instrument of knowledge useful for many people."
– Fr. José Antonio Fortea, author of Interview With an Exorcist: An Insider's Look at the Devil, Demonic Possession, and the Path to Deliverance

"Truth is stranger than fiction ... and far more terrifying. Forget what Hollywood tells you about demonic possession and exorcism; The Rite will open your eyes to the awesome truth about such things. I've been investigating paranormal events for some time, but this book taught me much that I didn't know about the timeless battle for the human soul waged between the forces of good and evil. Fascinating, inspiring, and scary, a great read."
— John Kachuba, author of Ghosthunters: On the Trail of Mediums, Dowsers, Spirit Seekers, and Other Investigators of America's Paranormal World

“What sets Baglio’s book apart from many other contemporary works on the same subject is its sober, measured tone and steady refusal to sensationalize the subject.”
– Amy Wellborn

MATT BAGLIO, a reporter living in Rome, has written for the Associated Press and the International Herald Tribune.
Loading...
or
Not Currently Available for Direct Purchase