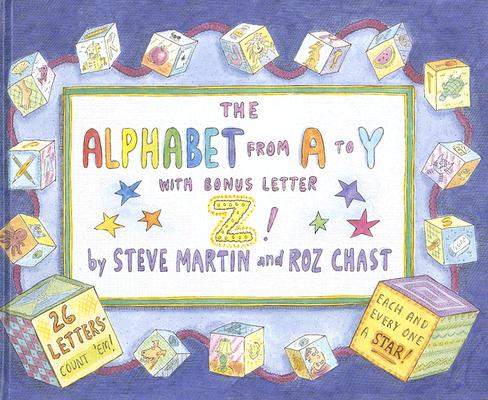 The Alphabet from A to y with Bonus Letter Z! (Library Binding)

The acclaimed entertainer and bestselling author Steve Martin and" "the wildly clever "New Yorker "cartoonist" "Roz Chast team up in a weird, wonderful excursion through the alphabet.
The ABCs have never had it so good. Created by two of today's wittiest, most imaginative minds, "The Alphabet from A to Y with Bonus Letter Z "is a sheer delight from A to Z. In twenty-six alliterative couplets, Steve Martin conjures up much more than mere apples and zebras. Instead we meet Horace the hare, whose hairdo hides hunchbacks, and Ollie the owl, who owed Owen an oboe. Roz Chast contributes the perfect visual settings for Martin's zany two-liners. Her instantly recognizable drawings are packed with humorous touches both broad and subtle.
Each rereading and there will be many delivers new delights and discoveries. There, hidden behind Bad Baby Bubbleducks, is a framed picture of a beatnik holding balloons; and the letter C finds clunky Clarissa all clingy and clueless adrift in a landscape cluttered with images ranging from a curiously comfortable clown to Chuck's Chili stand. A smart, laugh-inducing introduction to the alphabet for young children, "The Alphabet from A to Y with Bonus Letter Z " will also enchant adults with its matchless mix of the sophisticated and the silly.

STEVE MARTIN is a celebrated writer, actor, and performer. His film credits include "The Jerk," "Father of the Bride, " and "The Spanish Prisoner, "as well as "Roxanne," "L.A. Story," and "Bowfinger," for which he also wrote the screenplays. He is the author of the play "Picasso at the Lapin Agile" and of the bestselling collection of comic pieces" Pure Drivel, "as well as the bestselling novellas "The Pleasure of My Company" and "Shopgirl," which was made into a popular movie. His work appears frequently in "The New Yorker "and the" New York Times. "He lives in Los Angeles.

ROZ CHAST's cartoons have been appearing "in The New Yorker" since 1978. Her work also has appeared in many publications, including "Scientific American," "Travel & Leisure," the "Harvard Business Review" as well as many others. She has also published several cartoon collections, illustrated children's books, and designed CD covers, book jackets, and theater posters. Her most recent book is "Theories of Everything" (Bloomsbury, 2006). She was born in Brooklyn, New York, and currently resides in Connecticut.
or
Not Currently Available for Direct Purchase
Copyright © 2020 American Booksellers Association