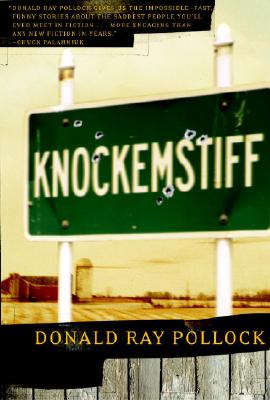 In this unforgettable work of fiction, Donald Ray Pollock peers into the soul of a tough Midwestern American town to reveal the sad, stunted but resilient lives of its residents.

Spanning a period from the mid-sixties to the late nineties, the linked stories that comprise Knockemstiff feature a cast of recurring characters who are woebegone, baffled and depraved—but irresistibly, undeniably real. Rendered in the American vernacular with vivid imagery and a wry, dark sense of humor, these thwarted and sometimes violent lives jump off the page at the reader with inexorable force. A father pumps his son full of steroids so he can vicariously relive his days as a perpetual runner-up body builder. A psychotic rural recluse comes upon two siblings committing incest and feels compelled to take action. Donald Ray Pollock presents his characters and the sordid goings-on with a stern intelligence, a bracing absence of value judgments, and a refreshingly dark sense of bottom-dog humor.

With an artistic instinct honed on the works of Flannery O’Connor and Harry Crews, Pollock offers a powerful work of fiction in the classic American vein. Knockemstiff is a genuine entry into the literature of place.

“More engaging than any new fiction in years…Knockemstiff gives us the impossible–fast, funny stories about the saddest people you’ll ever meet in fiction.”
–Chuck Palahniuk

“Knockemstiff is a powerful, remarkable, exceptional book…Pollock knows these people, what they want and think and fee, and he takes us there without flinching.”
–Los Angeles Times

“These are absorbing stories that linger and haunt. They crept up on me, leaving me breathless and shaken.”
–The Oregonian

“[Donald Ray Pollock] could be the next important voice in American fiction.”
–Wall Street Journal

“Startling, bleak, uncompromising and funny…This is as raw as American fiction gets. It is an unforgettable experience.”
–San Francisco Chronicle

“Profanely comic…Pollock’s tales are spiked with a lurid panache that handily earns its own literary genre: Southern Ohio Gothic.”
–Elle

“Pollock doesn’t so much push the envelope as incinerate it, but his potent narrative gifts (and pitch-black humor) make it impossible to look away from the flames.”
–The Washington Post (web)

“Here is a collection of stories that are perhaps unique in our time…Wry and raw and poignant, these extraordinary stories are gritty with the yeast of folks caught in the act of being only too human.”
–Larry Heinemann, author of Paco’s Story

Pollock's characters are in dire straits: They tend to be addicts, brutes, connivers and small-time criminals with big-time depravities. A boy gets caught having sex with his sister's doll in "Hair's Fate." "Pills" depicts tweakers on a binge. In "Giganthomachy," a woman draws tattoos on her son's arm, hands him a pair of scissors and asks him to come into her bedroom pretending to be mass-murderer Richard Speck: "Just spit on the floor, maybe," she says. "Hurt me, but don't really hurt me." Another woman, in "Rainy Sunday," helps her heavyset older aunt lure horny drunks into sex. "Blessed" shows a thief, disabled by falling off a roof mid-robbery, descending into a horrifically graphic addiction to painkillers. Several tales feature epicene young men hectored by violent fathers; others show people trying and failing again and again to escape, or even, finally, to want to escape. Throughout, Pollock shows deep empathy for these whipped and battered souls, most looking not so much for a way out as for a way to let it all slide. As one says, "It's the same for most of us; forgetting our lives might be the best we'll ever do." The stories are strikingly similar in tone, setting, characters, even length, but that's scarcely a problem in a collection as bleakly, unsettlingly funny—and touching—as this one.

Pollock grabs by the throat and doesn't let go.” —Kirkus

“A native of Knockemstiff, Ohio, Pollock delivers poignant and raunchy accounts of his hometown’s sad and stagnant residents in his debut story collection that may remind readers of its thematic grand-daddy, Winesburg, Ohio . . . The language and imagery of the novel are shockingly direct in detailing the pitiful lives of drug abusers, perverts, and a forgotten population that just isn’t “much welcome nowhere in the world.” Many of the characters appear in more than one story, providing a gritty depth to the whole, but the character that stands out the most is the town, as dismal and hopeless as the locals. Pollock is intimate with the grimy aspects of a small town (especially one named after a fistfight) full of poor, uneducated people without futures or knowledge of any other way to live. The most startling thing about these stories is that they have an aura of truth.”
—Publishers Weekly

“This electrifying collection of linked stories uses the voices of the rural hamlet of Knockemstiff to create a coherent world of echoing themes and recurring characters that has the drive and impact of a fine novel. Pollock brings grace and precision to colloquial language, and the ferocious integrity of his vision is flat-out stunning. Pollock grapples with savagery and reveals primal tenderness.
“After every story in Knockemstiff I had to take a walk and let my head cool down. I keep reaching for some other writer to compare him with—maybe a Raymond Carver with hope and vitality, or a godless Flannery O’Connor—but Pollock is no shadow of anybody else. This is a powerful talent at work.” —Katherine Dunn, author of Geek Love