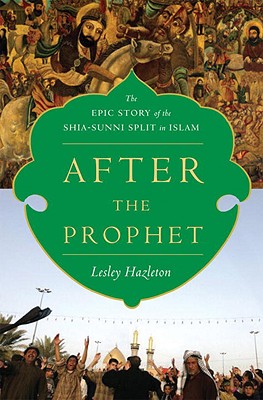 The Epic Story of the Shia-Sunni Split in Islam

Narrative history at its most compelling, After the Prophet allows readers to grasp the power and depth of the Shia-Sunni split as never before.

Even as Muhammad lay dying, the battle over who would succeed him as the ruler of the Muslim people had begun. And as Lesley Hazleton shows in her gripping history After the Prophet, the battle has never ended. This is the foundation story of the Shia-Sunni split in Islam, a magnificent tale of power, intrigue, assassination, and passionate faith. Starting in Arabia in the year 632 and reaching its terrible breaking point fifty years later in Iraq, it still shapes modern headlines from Iran’s Islamic Revolution to the Iraq civil war.

The succession crisis set Muhammad’s son-in-law, the philosopher-warrior Ali, in opposition to the controversial Aisha, Muhammad’s favorite wife. She would defy all expectations by leading an army against Ali, urging on her warriors in the thick of battle. The ultimate breaking point came when soldiers of the first Sunni dynasty massacred seventy-two warriors led by Ali’s son, Hussein, at Karbala in Iraq, forging the Shia-Sunni split in blood. Hussein’s ordeal would quickly become the Passion story at the core of Shia Islam, and history would be transformed into sacred history.

Balancing past and present, Lesley Hazleton shows how this story is alive in Middle Eastern hearts and minds today, as though it had just happened. Even as she tells what happened in the seventh century, she never lets the reader lose sight of where those events have left us, and why they matter so much now as the struggle for dominance in the Muslim world plays out in the cities and mountains of Iraq and Iran, Pakistan and Afghanistan.

Placed squarely at the volatile intersection of religion and politics, history and current events, the vividly narrated After the Prophet is compulsive reading—and an emotional and political revelation for Western readers.


Praise For After the Prophet: The Epic Story of the Shia-Sunni Split in Islam…

Praise for After the Prophet

“After the Prophet is a remarkable and respectful telling of the story of Islam—a tale of power, intrigue, rivalry, jealousy, assassination, manipulation, greed, and faith that would have made Machiavelli shudder (had he read it), but above all it is a very human story, told in a wonderfully novelistic style that puts most other, often dreary, explanations of the Shia-Sunni divide to shame.”
—Hooman Majd, author of The Ayatollah Begs to Differ

“After the Prophet vividly re-creates the personal rivalries and resentments that led to Islam’s great schism in the immediate wake of Muhammad’s death, and makes one understand how truly contemporary they are with our own time. Lesley Hazleton brings off the happy effect of turning the reader into a participant in the world she describes—a world of long memories, where the deep past lives on in the present day, as if the Battle of Karbala in 680 A.D. was little more than an eyeblink away from the Ashura Massacre there in 2004.

“My only regret is that Hazleton didn’t write this terrific and necessary book in time to enlighten Donald Rumsfeld, Paul Wolfowitz, et al., before they so unwisely invaded a land, and a religious culture, of which they were reprehensibly ignorant. I hope they read it now, with proper rue. Meanwhile, the rest of us can take pleasure in Hazleton’s vigorously drawn characters, her lucid storytelling, and her enthralling, imaginative grasp of the roots and consequences of the Sunni-Shia divide.”
—Jonathan Raban, author of My Holy War and Surveillance

“Lesley Hazleton succeeds in bringing out the truly epic character of the Shia-Sunni split, telling the story with great empathy. The general Western reader will come away from this book with a newfound respect for the depth and power of the early schism in Islam and of what happened at Karbala.”
—Wilferd Madelung, Laudian Professor of Arabic, University of Oxford, and author of The Succession to Muhammad

“Whether or not George Bush even knew there were such things as Shias and Sunnis before invading Iraq, after reading Lesley Hazleton’s gripping book no one will be able to plead ignorance about why the split between them happened and what it all means.”
—Alan Wolfe, director, Boisi Center for Religion and American Public Life, and author of The Future of Liberalism

British-born Lesley Hazleton is a psychologist and veteran Middle East journalist whose work has appeared in the" New York Times, Esquire, Vanity Fair, Harper's The Nation, New Republic, New York Review of Books," and other publications. The author of several acclaimed books on Middle East politics, religion, and history, including "Jerusalem, Jerusalem "and "Mary: A Flesh-and-Blood Biography of the Virgin Mother," she now lives in Seattle, Washington.

www.AfterTheProphet.com
Loading...
or
Not Currently Available for Direct Purchase