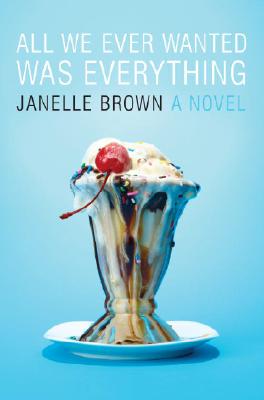 All We Ever Wanted Was Everything

A smart, comic page-turner about a Silicon Valley family in free fall over the course of one eventful summer.

When Paul Miller’s pharmaceutical company goes public, making his family IPO millionaires, his wife, Janice, is sure this is the windfall she’s been waiting years for — until she learns, via messengered letter, that her husband is divorcing her (for her tennis partner!) and cutting her out of the new fortune. Meanwhile, four hundred miles south in Los Angeles, the Millers’ older daughter, Margaret, has been dumped by her newly famous actor boyfriend and left in the lurch by an investor who promised to revive her fledgling post-feminist magazine, Snatch. Sliding toward bankruptcy and dogged by creditors, she flees for home where her younger sister Lizzie, 14, is struggling with problems of her own. Formerly chubby, Lizzie has been enjoying her newfound popularity until some bathroom graffiti alerts her to the fact that she’s become the school slut.

The three Miller women retreat behind the walls of their Georgian colonial to wage battle with divorce lawyers, debt collectors, drug-dealing pool boys, mean girls, country club ladies, evangelical neighbors, their own demons, and each other, and in the process they become achingly sympathetic characters we can’t help but root for, even as the world they live in epitomizes everything wrong with the American Dream. Exhilarating, addictive, and superbly accomplished, All We Ever Wanted Was Everything crackles with energy and intelligence and marks the debut of a knowing and very funny novelist, wise beyond her years.


Praise For All We Ever Wanted Was Everything…

Praise for All We Ever Wanted Was Everything

"Brown's winning debut teaches a hopeful truth: Sometimes, just as you're starting to drown, things fall back into place."
–People


"Janelle Brown expertly takes the social temperature of those gated communities exclusive to new money and finds a chill that inhabits the growth of family life...[a] beauty of a book"
–New York Daily News


“A withering Silicon Valley satire . . . From the ashes of their California dreams, the three [women] must learn to talk to each other instead of past each other, and build a new, slightly more realistic existence—but not without doses of revenge and hilarity. Brown's hip narrative reads like a sharp, contemporary twist on The Corrections.”
—Publishers Weekly


“A razor-sharp critique of the absurd expectations that, these days, have come to stand for ambition, All We Ever Wanted Was Everything is wrenching, riveting, and still manages to be great fun. This is a wise, intimate chronicle of one family’s struggle to take off their masks and live in the place they most feared: the real, imperfect world.”
—Meghan Daum, author of The Quality of Life Report


“Rarely does a first novelist write with such confidence and grace. All We Ever Wanted Was Everything is a marvelous book.”
—Ayelet Waldman, author of Love and Other Impossible Pursuits


“Janelle Brown's beautiful debut explores the tiny fissures in our lives and what happens when those fissures erupt into chasms. Excruciatingly funny, unrelentingly painful—this extraordinary book gives us something only the best novels can: a glimpse of what it means to be human.”
—Katherine Taylor, author of Rules for Saying Goodbye