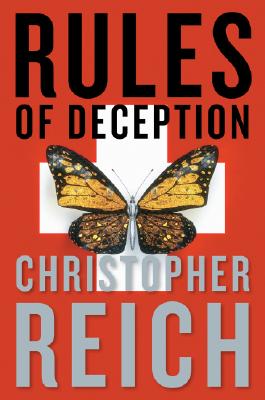 Dr. Jonathan Ransom, world-class mountaineer and surgeon for Doctors Without Borders, is climbing in the Swiss Alps with his beautiful wife, Emma, when a blizzard sets in. In their bid to escape the storm, Emma is killed when she falls into a hidden crevasse.

Twenty-four hours later, Jonathan receives an envelope addressed to his wife containing two baggage-claim tickets. Puzzled, he journeys to a remote railway station only to find himself in a life-and-death struggle for his wife’s possessions. In the aftermath of the assault, he discovers that his attackers—one dead, the other mortally wounded—were, in fact, Swiss police officers. More frightening still is evidence of an extraordinary act of betrayal that leaves Jonathan stunned.

Suddenly the subject of an international manhunt and the target of a master assassin, Jonathan is forced on the run. His only chance at survival lies in uncovering the devastating truth behind the secret his wife kept from him and in stopping the terrifying conspiracy that threatens to bring the world to the brink of annihilation. Step by step, he is drawn deeper into a world of spies, high-tech weaponry, and global terrorism—a world where no one is whom they appear to be and where the end always justifies the means.

Rules of Deception is a brilliantly conceived, twisting tale of intrigue and deceit written by the master of the espionage thriller for the twenty-first century.

Praise For Rules of Deception…

"Never has a plane ride gone by so quickly!  Rules of Deception was such a thrilling and compelling read that I spent the whole flight anxiously turning the pages, breathless to find out how it ended.  Full of stunning twists and turns, packed with suspense, this is everything a great thriller should be."
–Tess Gerritsen

"Rules of Deception is an intense, impossible-to-put down spy novel–like Robert Ludlum at his very best."
–Vince Flynn

"Fast-paced and intriguing, Rules of Deception is a great international thriller full of twists and turns that kept me guessing to the very end. A very enjoyable read."
–Kate Mosse, author of Labyrinth

"Rules of Deception packs a wallop. Christopher Reich is at the top of his game."
–David Baldacci

"There's a reason why Christopher Reich is a superstar writer. You'll find it on page one of this book. And page two. And page three…and all the way to the vivid end of this great new thriller."
–Lee Child

“Rules of Deception is an ingenious thriller set credibly in the shadowy world of international espionage.  This one has it all: well-drawn characters, wonderful writing, exotic settings, and a high-tech terrorist plot that will keep you breathlessly racing along right through its electrifying climax.”
–Nelson DeMille

“Rules of Deception delivers pure suspense, intrigue, and adventure from its first page to its last. Christopher Reich is the master of the espionage thriller for the 21st century.”
–Clive Cussler

“Christopher Reich is one of my favorite suspense writers and he’s outdone himself this time. From the ingenious opening, featuring a butterfly of all things, to the mind-blowing switcheroo ending, this is a book and a movie, all in one!”
–James Patterson

"Once again, Chris Reich is firing on all cylinders. Rules of Deception is a supple, elegant thriller with a beguiling sophistication. Reich catches the reader on page one and utterly commands you to finish through a plot that carries triumphantly from one thrilling climax to another. He certainly knows how to manipulate the reader in exciting ways, and he's an expert (as his award winning The Patriots Club proved) in creating a riveting imagined world so real you wonder if it was actually imagined."
–Steve Berry, author of The Alexandria Link