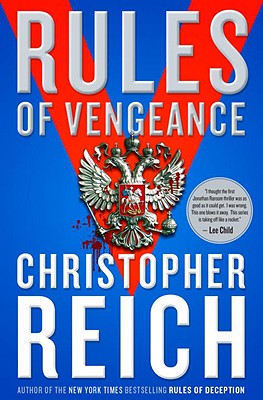 A riveting sequel to the New York Times bestseller Rules of Deception that confirms Christopher Reich as the master of the espionage thriller.

Months after foiling an attack on a commercial jetliner, Doctors Without Borders physician Jonathan Ransom is working under an assumed name in a remote corner of Africa while his wife, Emma, desperate to escape the wrath of Division, the secret American intelligence agency she betrayed, has vanished into the netherworld of international espionage. Both look forward to sharing a stolen weekend in London—until an ambush on a convoy of limousines turns their romantic rendezvous into a terrorist bloodbath.

In the aftermath, Emma disappears and Jonathan is apprehended by the police and threatened with life imprisonment unless he helps secure his wife’s capture. Faced with an impossible decision, Jonathan makes a daring escape. On the run, he realizes that his only option is to become a spy himself in order to track down Emma and discover the true nature of the conspiracy she appears to be masterminding. In the process, Jonathan begins to realize that all along he’s been a pawn in a high-stakes game of international intrigue and one-upsmanship far beyond his imagining.

CHRISTOPHER REICH is the "New York Times" bestselling author of "Rules of Deception," "Numbered Account," and "The Patriots Club," which won the International Thiller Writers award for best novel in 2006. He lives in California with his family.

Praise For Rules of Vengeance…

Advance rave for Rules of Vengeance by Christopher Reich

Near the start of bestseller Reich's stellar sequel to Rules of Deception, Dr. Jonathan Ransom flies from Africa to London for a medical conference. That same day, intermediaries arrange for him to meet his fugitive wife, Emma, once a secret agent with the Pentagon group known as Division, in a cheap hotel. The next day, Jonathan's world is literally and figuratively torn apart after a large car bomb explodes in Westminster, seriously injuring the Russian interior minister. Jonathan is sure Emma is behind the car bombing, but the police, led by Det. Chief Insp. Kate Ford, think Jonathan is responsible. Thus begins a convoluted chase–Jonathan hunting his wife, Kate and the cops along with MI5 agent Colonel Graves tracking Jonathan. Everyone, including the reader, remains clueless, except for master spy Emma, as to who is really the guilty party. A blinding twist at the end adds a spectacular fillip to a masterful performance by one of the genre's elite.
--Publishers Weekly (starred)


Exceptional Praise for Rules of Deception by Christopher Reich

“Rules of Deception is an intense, impossible-to-put down spy novel—like Robert Ludlum at his very best."
—Vince Flynn

"Rules of Deception packs a wallop. Christopher Reich is at the top of his game."
—David Baldacci

“Christopher Reich is one of my favorite suspense writers, and he’s outdone himself this time.”
—James Patterson

“Rules of Deception delivers pure suspense, intrigue, and adventure from its first page to its last. Christopher Reich is the master of the espionage thriller for the twenty-first century.”
—Clive Cussler

“Rules of Deception develops an entertainingly serpentine complexity . . . And his finale lives up to the level of suspense he has created.” —New York Times