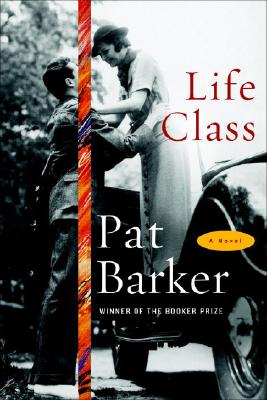 From the Booker Prize–winning author of The Regeneration Trilogy, an acknowledged masterpiece of modern fiction, Life Class is an exceptional new novel of artists and lovers caught in the maelstrom of the Great War.

It is the spring of 1914 and a group of young students have gathered in an art studio for a life-drawing class. Paul Tarrant and Elinor Brooke are two parts of an intriguing love triangle and, in the first days of war, they turn to each other. As spring turns to summer, Paul volunteers for the Belgian Red Cross and tends to wounded, dying soldiers from the front line. By the time he returns, Paul must confront the fact that life and love will never be the same for him again.

In Life Class, Pat Barker returns to her most renowned subject: the human devastation and psychic damage wrought by World War One on all levels of British society. Her skill in relaying the harrowing experience of modern warfare is matched by the depth of insight she brings to the experience of love and the morality of art in a time of war. Life Class is one of her genuine masterpieces.

“BEAUTIFUL AND EVOCATIVE…a coming-of-age story that transcends the individual and gestures to the fate of a generation.”–People

“A BOOK SO ALIVE FROM PAGE TO PAGE THAT IT’S DIFFICULT TO PUT DOWN.”–Seattle Times

“Pat Barker writes with clear, straightforward realism showing her debt to British writers such as D.H. Lawrence and George Orwell, and reserving a place for herself in English letters as the peacetime novelist who knows best how to write about war.”–Alan Cheuse, NPR’s All Things Considered

“Here, as in her best fiction, Barker unveils psychologically rich characters…and resists the trappings of a neat love story, reminding us once again that in art and life we remain infinitely mysterious.”–San Francisco Chronicle

“This is a story about hopeful ambitions and relationships redirected and reshaped by a climate of catastrophic change.…[It] render[s] the horrors of combat with (Barker’s trademark) meticulously researched detail and piercing clarity. Secondary characters’ experiences likewise amplify into lucid microcosms of the global cataclysm that shadows every individual life.…Mature, unsentimental and searching. One of this excellent writer’s finest books.” —Kirkus Reviews (starred)

“With great tenderness and insight, and a daring to forgo simple resolutions, Barker conveys a wartime world turned upside down.” —Mark Bostridge, The Independent

“As ever with Barker…the writing is breathtaking…sharply written and elegantly constructed.” —D. J. Taylor, The Guardian


Praise for The Regeneration Trilogy:

“It has been Pat Barker’s accomplishment to enlarge the scope of the contemporary English novel.” —The New Yorker

“Some of the most powerful antiwar writing in modern fiction.” —Boston Globe