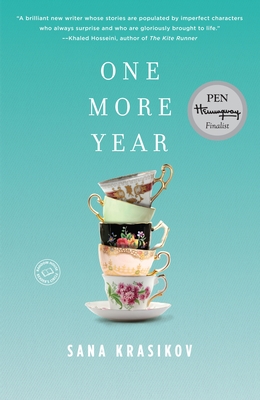 Praise For One More Year: Stories…

“Sana Krasikov’s memorable characters emerge, fully formed and breathing on their own, from a deep, clear pool of seemingly effortless language, a knowing and incisive but empathetic sensibility. These stories are original, resplendent, and brilliant.”—Kate Christensen, author of The Great Man

“Sana Krasikov is the real thing. Her stories take shape inside the specific world of émigrés wrestling with language and loss and the stubborn details of survival, but they open into the largest of worlds and speak a universal language of heartbreak and desire.”—Jonathan Rosen, author of The Life of the Skies

“In her stunning short-story debut, Krasikov hones in on the subtleties of hope and despair that writhe in the hearts of her protagonists, largely Russian and Georgian immigrants who have settled on the East Coast … Krasikov’s prose is precise, and her stories are intelligent, complex, and passionate.”—Publishers Weekly, starred review

“Sana Krasikov’s observations of the world her characters inhabit—full of big and small tragedies, laughable and lamentable incidents—are as sharp as a surgeon’s scalpel, yet her understanding of her characters—most often of their follies and imperfections—are tender and sympathetic. She treats every story as a novel, and the readers of these stories will, in the end, live with the characters beyond the space of a short story. These stories are the debut of a major literary voice shaped by the literary traditions both American and Russian.”—Yiyun Li, author of A Thousand Years of Good Prayers

“Shrewdly humane and formally exquisite . . . Krasikov is as good as Junot Díaz and Jhumpa Lahiri were at this stage in their careers.”—Miami Herald

Sana Krasikov is the author of the novel The Patriots and the collection One More Year. She's been a finalist for the PEN/Hemingway Award and The New York Public Library’s Young Lions Fiction Award, and won the Sami Rohr Prize for Jewish Literature. The National Book Foundation named her one of its 5 Under 35 in 2008. For The Patriots she was selected as one of 2017's Best of Young American Novelists by Granta, and won the French Prix du Premier Roman for best new novel in translation. Krasikov’s fiction has appeared in The New Yorker, The Atlantic, The Virginia Quarterly and other journals. She also writes and edits for podcasts, including the narrative international show Rough Translation on public radio.