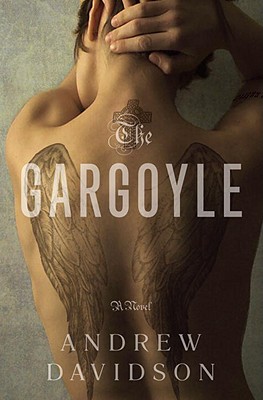 “Andrew Davidson immerses you in a different reality and takes you on quite a roller coaster ride. This is an unusual story about the power of love to transcend physical limitations and to transfrom ugliness into beauty. As we are often told, love is all in the eye of the beholder. This book makes you believe that simple truth.”
— Miriam Sontz, Powell's Books, Inc, Portland, OR
View the List

“Andrew Davidson immerses you in a different reality and takes you on quite a roller-coaster ride. This is an unusual story about the power of love to transcend physical limitations and to transform ugliness into beauty. As we are often told, love is all in the eye of the beholder. This book makes you believe that simple truth.”
— Miriam Sontz, Powell's Books, Inc, Portland, OR
View the List

The narrator of The Gargoyle is a very contemporary cynic, physically beautiful and sexually adept, who dwells in the moral vacuum that is modern life. As the book opens, he is driving along a dark road when he is distracted by what seems to be a flight of arrows. He crashes into a ravine and suffers horrible burns over much of his body. As he recovers in a burn ward, undergoing the tortures of the damned, he awaits the day when he can leave the hospital and commit carefully planned suicide—for he is now a monster in appearance as well as in soul.

A beautiful and compelling, but clearly unhinged, sculptress of gargoyles by the name of Marianne Engel appears at the foot of his bed and insists that they were once lovers in medieval Germany. In her telling, he was a badly injured mercenary and she was a nun and scribe in the famed monastery of Engelthal who nursed him back to health. As she spins their tale in Scheherazade fashion and relates equally mesmerizing stories of deathless love in Japan, Iceland, Italy, and England, he finds himself drawn back to life—and, finally, in love. He is released into Marianne's care and takes up residence in her huge stone house. But all is not well. For one thing, the pull of his past sins becomes ever more powerful as the morphine he is prescribed becomes ever more addictive. For another, Marianne receives word from God that she has only twenty-seven sculptures left to complete—and her time on earth will be finished.

Already an international literary sensation, the Gargoyle is an Inferno for our time. It will have you believing in the impossible.


Praise For The Gargoyle…

“Seductive…The free-range erudition of books like Possession and The Name of the Rose come to mind.”–Janet Maslin, The New York Times

“Undeniably a hot book, one likely to ignite the passion of anyone who loves a mix of romance and the macabre.”–Washington Post Book Review

“A story that sweeps you in…the real tragedy of this book is that it ends.”–The Daily News

“[A] powerful debut… Once launched into this intense tale of unconventional romance, few readers will want to put it down.” –Publishers Weekly (starred)

“I was blown away by Andrew Davidson's The Gargoyle. It reminded me of Life of Pi, with its unanswered (and unanswerable) contradictions. A hypnotic, horrifying, astonishing novel that manages, against all odds, to be redemptive."
—Sara Gruen, author of Water for Elephants

“The Gargoyle is purely and simply an amazement, a riot, a blast. It's hard to believe that this is Andrew Davidson's first novel: He barrels out of the chute with the narrative brio and confidence, not to mention the courage, of a seasoned master. This book plucks the reader off the ground and whirls her through the air until she shouts from sheer abandonment and joy. What a great, grand treat.”
—Peter Straub