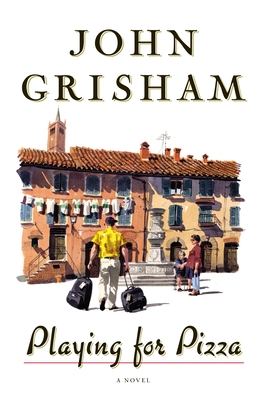 Rick Dockery was the third-string quarterback for the Cleveland Browns. In the AFC Championship game against Denver, to the surprise and dismay of virtually everyone, Rick actually got into the game. With a 17-point lead and just minutes to go, Rick provided what was arguably the worst single performance in the history of the NFL. Overnight, he became a national laughingstock and, of course, was immediately cut by the Browns and shunned by all other teams.

But all Rick knows is football, and he insists that his agent, Arnie, find a team that needs him. Against enormous odds Arnie finally locates just such a team and informs Rick that, miraculously, he can in fact now be a starting quarterback. Great, says Rick—for which team?

The mighty Panthers of Parma, Italy.

Yes, Italians do play American football, to one degree or another, and the Parma Panthers desperately want a former NFL player—any former NFL player—at their helm. So Rick reluctantly agrees to play for the Panthers—at least until a better offer comes along—and heads off to Italy. He knows nothing about Parma—not even where it is—has never been to Europe, and doesn’t speak or understand a word of Italian.

To say that Italy—the land of opera, fine wines, extremely small cars, romance, and Football Americano— holds a few surprises for Rick Dockery would be something of an understatement.

Praise For Playing For Pizza: A Novel…

“Score another one for Grisham...This is a fish-out-of-water tale that perfectly suits his strengths as a storyteller.” —USA Today

“A light-hearted story of football, food and love.” —Richmond Times-Dispatch

“Football in Italy? Who knew? Grisham means to have a sweet time with this story of a fallen NFL quarterback. And he does.” —Daily News (New York)

Since first publishing A Time to Kill in 1988, Grisham has written one novel a year (his other books are The Firm, The Pelican Brief, The Client, The Chamber, The Rainmaker, The Runaway Jury, The Partner, The Street Lawyer, The Testament, The Brethren, A Painted House, Skipping Christmas, The Summons, The King of Torts, Bleachers, The Last Juror, and The Broker) and all of them have become international bestsellers. The Innocent Man (October 2006) marks his first foray into non-fiction.

Grisham lives with his wife Renee and their two children Ty and Shea. The family splits their time between their Victorian home on a farm in Mississippi and a plantation near Charlottesville, VA.
Loading...
or support indie stores by buying on
(This book is on backorder)