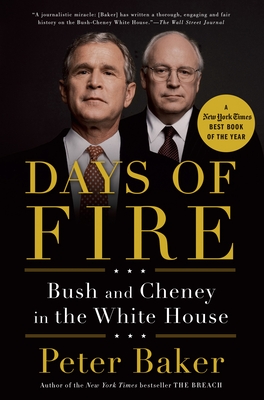 Theirs was the most captivating American political partnership since Richard Nixon and Henry Kissinger: a bold and untested president and his seasoned, relentless vice president. Confronted by one crisis after another, they struggled to protect the country, remake the world, and define their own relationship along the way.

The real story of George W. Bush and Dick Cheney is far more fascinating than the familiar suspicion that Cheney was the power behind the throne. Drawing on hundreds of interviews with key players, and thousands of pages of private notes, memos, and other internal documents, Baker paints a riveting portrait of a partnership that evolved dramatically over time, during an era marked by devastating terror attacks, the Iraq War, Hurricane Katrina, and financial collapse. Peter Baker has produced a monumental and definitive work that ranks with the best of presidential histories.


Praise For Days of Fire: Bush and Cheney in the White House…

“A journalistic miracle: [Baker] has written a thorough, engaging and fair history on the Bush-Cheney White House.”
—The Wall Street Journal

“Filled with enlivening detail and judicious analysis, Days of Fire is the most reliable, comprehensive history of the Bush years yet.”
—The New York Times

“Impressive . . . a distinguished work, notable for its scope and ambition. . . . As thorough and detailed an account of the Bush years . . . as we are ever likely to get. . . . Baker draws out each development in this tangled relationship in much the same way that Robert Caro wrote about the relationship between John F. Kennedy and Lyndon Johnson.”
—The Washington Post

“Poignant. . . . The story of those eight years would seem far too vast to contain inside a single volume. Yet here that volume is. Peter Baker neither accuses nor excuses. He writes with a measure and balance that seem transported backward in time from some more dispassionate future.”
—The New York Times Book Review

“A fine new book about [Bush’s] time in office. . . . [Baker’s] shrewd, meticulous reporting offers a useful corrective to tales of a puppet-master deputy manipulating an inexperienced boss.”
—The Economist

“This is political journalism and history at its best. A deep, credible, and compelling account of the Bush presidency and the relationship between Bush and Cheney.”
—Norm Ornstein, The Best Political Books of the Year, National Journal

“An encyclopedic and even-handed account of the Bush years. . . . Baker offers clear-eyed perspective on the fateful decisions of a decade ago. . . . [A] kaleidoscopic, behind-the-scenes narrative.”
—The Christian Science Monitor

“Magisterial. . . . [A] remarkable achievement. . . . Baker has done a tremendous job of knitting together the disparate strains of a complex and multilayered narrative. For all its density, the book proceeds at a beach-read velocity that makes it a pleasure to peruse.”
—The National Interest

“The new book with all the buzz is Days of Fire. . . . A magisterial study of the way [Bush and Cheney] influenced each other, waxing and then waning, during the fateful eight-year presidency of George W. Bush.”
—US News & World Report

“The first comprehensive narrative history of what will surely remain one of the most controversial presidential administrations in U.S. history. . . . All subsequent writers dealing with the subject will find his book indispensable.”
—Foreign Affairs

“Baker’s book is red meat for political junkies. . . . Mr. Baker’s fair book is an admirable attempt to put a polarizing administration into perspective. But it’s not designed to forgive and forget. If anything, it resurrects the consequential days of an administration that dealt with unprecedented problems and tensions in a uniquely headstrong, American way.”
—Pittsburgh Post-Gazette

“This is an amazing book, a deeply reported, wonderfully written and—crucially—wholly fair and penetrating review and critique of the Bush-Cheney years, their turmoil and tragedy, their great successes and their great failures.  I can’t think of a book produced so close to a presidency that has done quite what Baker does in this book. . . . You will be inside the Bush White House in a way you could not have ever have hoped to see inside until decades from now.”
—Hugh Hewitt

“On each page, there are stories that I remember well from my days in the Bush White House; stories that I’m surprised Peter discovered, and revelations that I read about for the first time.”
—Nicolle Wallace, former White House Communications Director

“Peter Baker’s superb biography of George W. Bush and Dick Cheney will stand as the most complete and balanced discussion of the men and their administration for decades. . . . No one has drawn the complicated Bush-Cheney relationship more convincingly than Baker. Anyone eager to understand our current dilemmas does well to read this book.”
—Robert Dallek, author of Nixon and Kissinger: Partners in Power

“Peter Baker tells the story of Bush and Cheney with the precision of a crack reporter and the eye and ear of a novelist. . . . A splendid mix of sweeping history and telling anecdotes that will keep you turning the page.”
—Chris Wallace, anchor of Fox News Sunday

“It turns out George W. Bush was no puppet, and Dick Cheney no puppet master. Days of Fire takes us inside a relationship that came to define American conflict, peace, and politics. . . . This excellent book tells us what really happened, from the mouths of the players themselves.”
—Gwen Ifill, coanchor of PBS Newshour

“Peter Baker’s Days of Fire is a book for every presidential hopeful and every citizen.”
—Tom Brokaw, author of The Greatest Generation

“You may or may not agree with George W. Bush’s actions as president, but by the time you put Days of Fire down, you will understand them, and him, as never before.”
—Richard Norton Smith, author of Thomas E. Dewey and His Times

“A fast-paced read that deftly weaves the trials and tribulations of the Bush presidency into a monumental tale of hubris and missed opportunities for greatness.”
—Publishers Weekly, starred review

“A thorough, objective and surprisingly positive examination of the Bush-Cheney years. . . . This briskly written but exhaustively detailed account defies expectations. . . . A major contribution to the rehabilitation of our 43rd president.”
—Kirkus Reviews, starred review

“Steeped in facts, and the writing is clear and crisp. . . . [Days of Fire] offers breathtaking insights into power, passion and politics at the highest levels of our government.”
—BookPage

Peter Baker is the Chief White House Correspondent for The New York Times and a regular panelist on Washington Week on PBS. He is the author of the New York Times bestseller The Breach, about Bill Clinton’s impeachment, and, with his wife, Susan Glasser, of Kremlin Rising, about Vladimir Putin’s Russia.