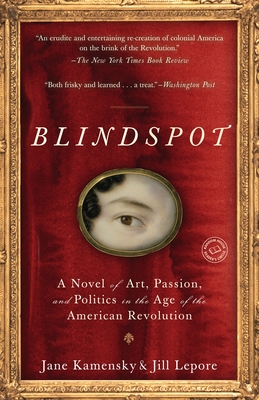 Stewart Jameson, a Scottish portrait painter fleeing his debtors in Edinburgh, has washed up on the British Empire's far shores—in the city of Boston, lately seized with the spirit of liberty. Eager to begin anew, he advertises for an apprentice, but the lad who comes knocking is no lad at all. Fanny Easton is a fallen woman from Boston's most prominent family who has disguised herself as a boy to become Jameson's defiant and seductive apprentice.
Written with wit and exuberance by accomplished historians, Blindspot is an affectionate send-up of the best of eighteenth-century fiction. It celebrates the art of the Enlightenment and the passion of the American Revolution by telling stories of ordinary people caught up in an extraordinary time.

Jane Kamensky, professor of American history and chair of the History Department at Brandeis, is the author of The Exchange Artist.

Jill Lepore is the Kemper Professor of American History at Harvard University and a staff writer at The New Yorker.

Praise For Blindspot: A Novel…

"A lusty romance, a murder mystery and a bit of Americana, all rolled into one big, fat historical romp . . . Lepore and Kamensky have re-created a fascinating world and brought history hotly alive."—San Francisco Chronicle

"An erudite and entertaining re-creation of colonial America on the brink of the Revolution."—New York Times Book Review

"A rip-roaring yarn, a real romp . . . It's fantastic—the romance novel of your dreams."—Newsday

"A droll, edifying novel . . . Not since John Barth . . . has anyone rendered colonial America in such exquisite satirical strokes. Blindspot succeeds as raw entertainment; better, it soars as cunning academic revisionism."—Chicago Tribune