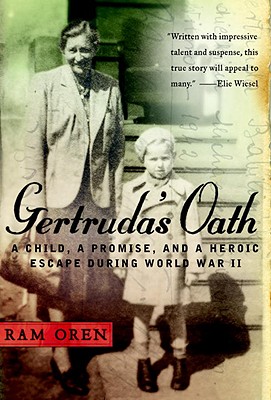 A Child, a Promise, and a Heroic Escape During World War II

Trapped in the horrors of World War II, a woman and a child embark on a journey of survival in this page-turning true story that recalls the power and the poignancy of Schindler’s List.

Michael Stolowitzky, the only son of a wealthy Jewish family in Poland, was just three years old when war broke out and the family lost everything. His father, desperate to settle his business affairs, travels to France, leaving Michael in the care of his mother and Gertruda Bablinska, a Catholic nanny devoted to the family. When Michael's mother has a stroke, Gertruda promises the dying woman that she will make her way to Palestine and raise him as her own son.

Written with the invaluable assistance of Michael, now seventy-two and living in New York City, GERTRUDA’S OATH re-creates Michael and Gertruda’s amazing journey. Gripping vignettes bring to life the people who helped ensure their survival, including SS officer Karl Rink, who made it his mission to save Jews after his own Jewish wife was murdered; Rink’s daughter, Helga, who escaped to a kibbutz, where she lived until her recent death; and the Jewish physician Dr. Berman, who aided Michael and Gertruda through the worst of times.

GERTRUDA’S OATH is a story of extraordinary courage and moral strength in the face of horrific events. Like Schindler’s List, it transcends history and religion to reveal the compassion and hope that miraculously thrives in a world immersed in war without end.


Praise For Gertruda's Oath: A Child, a Promise, and a Heroic Escape During World War II…

"Written with impressive talent and suspense, this true story will appeal to many." --Elie Wiesel

RAM OREN is known as the John Grisham of Israel. Formerly a lawyer and journalist, he founded the Keshet publishing company and has written more than sixteen runaway bestsellers. GERTRUDA'S OATH is Oren's first English translation sold in the United States. He lives in Israel.