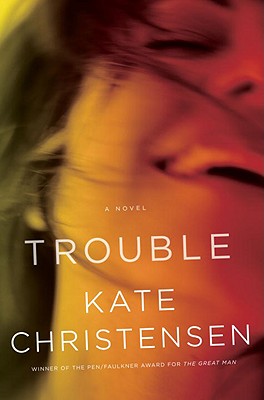 “A sexy, steamy book just in time for the hot summer months. Kate Christensen knows how to write dialogue and characters, and she does it again with the story of two female friends going to Mexico to escape their relationship problems.”
— Michele Filgate, RiverRun Bookstore, Portsmouth, NH
View the List

Josie is a Manhattan psychotherapist living a comfortable life with her husband and daughter—until, while suddenly flirting with a man at a party, she is struck with the sudden realization that she must leave her passionless marriage. A thrillingly sordid encounter with a stranger she meets at a bar immediately follows. At the same time, her college friend Raquel, a Los Angeles rock star, is being pilloried in the press for sleeping with a much younger man who happens to have a pregnant girlfriend. This proves to be red meat to the gossip hounds of the Internet. The two friends escape to Mexico City for a Christmas holiday of retreat and rediscovery of their essential selves. Sex has gotten these two bright, complicated women into interesting trouble, and the story of their struggles to get out of that trouble is totally gripping at every turn.

A tragicomedy of marriage and friendship, Trouble is a funny, piercing, and moving examination of the battle between the need for connection and the quest for freedom that every modern woman must fight.

Praise for The Great Man, winner of the PEN/Faulkner Award

“The Great Man is as unexpectedly generous as it is entertaining . . . Christensen is a witty observer of the art universe.” —Janet Maslin, New York Times


“Christensen is a writer of exceptional polish and keen intent, lacing her clever, well-designed plot with intriguing observations about the evolution (some might say devolution) of art, the inequities between men and women, and the insidiousness of racism. . . . Great fun from start to finish.” —Donna Seaman, Chicago Tribune

“Clever and incisive . . . The tension between her characters’ colorful pasts and the yearning (sexual and otherwise) for their latter days is heartbreaking. But these women brim with a wit and personality that overshadow the cocky artist around whom they’ve orbited.” —New York

“Provides no shortage of pop-intellectual entertainment . . . [A] profoundly feminist story of the three women who in various ways propped up Feldman’s career over the course of a lifetime.” —Elle

“The Great Man defies convention . . . That Christensen, who is in her mid-40s, can so aptly capture not just the loneliness, losses, and angst, but also the acceptance, of growing old, is a testament to her tremendous skill.” —Sally Abrahms, AARP magazine

Kate Christensen is also the author of the novels "In the Drink," "Jeremy Thrane," "The Epicure's Lament," and "The Great Man," winner of the 2008 PEN/Faulker Award. She lives in Brooklyn.

Do you empathize or disagree with Josie’s decision to leave Anthony and her reasons for doing so? Did you find Josie to be a sympathetic character at the beginning of the novel? In the end? Why or why not?

In Chapter Two, we see Josie in four psychotherapy sessions with her clients. Why do you think the author included these scenes in the novel? Do Josie’s training and experience as a therapist enable her to have increased insight into the people around her?

Mexico City serves as a needed escape valve for both Josie and Raquel. Why do you think the author chose this city for the setting of converging and diverging paths of these two friends? What role does Mexico itself play in the unfolding story?

There are several instances and places during the novel in which a ritualized encounter takes place, among them the paparazzi descending on Raquel, a bullfight, and references to the human-sacrifice rituals of the Aztecs. Are there other instances of such encounters? What do you think the author is suggesting about the apparent ongoing human need for them?

On page 307, going home from Raquel’s mother’s house in a taxi with Wendy, Josie reflects about the kind of friend she has been to Raquel: “Maybe she and I had failed each other by allowing each other the freedom to be ourselves, and maybe that was the inevitable consequence of true friendship.” What do you think she means by this? Do you agree?