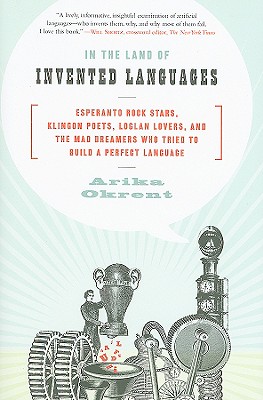 In the Land of Invented Languages

Esperanto Rock Stars, Klingon Poets, Loglan Lovers, and the Mad Dreamers Who Tried to Build A

Just about everyone has heard of Esperanto, which was nothing less than one man’s attempt to bring about world peace by means of linguistic solidarity. And every Star Trek fan knows about Klingon, which was nothing more than a television show’s attempt to create a tough-sounding language befitting a warrior race with ridged foreheads. But few people have heard of Babm, Blissymbolics, and the nearly nine hundred other invented languages that represent the hard work, high hopes, and full-blown delusions of so many misguided souls over the centuries.

In In The Land of Invented Languages, author Arika Okrent tells the fascinating and highly entertaining history of man’s enduring quest to build a better language. Peopled with charming eccentrics and exasperating megalomaniacs, the land of invented languages is a place where you can recite the Lord’s Prayer in John Wilkins’s Philosophical Language, say your wedding vows in Loglan, and read Alice's Adventures in Wonderland in Lojban.

A truly original new addition to the booming category of language books, In The Land of Invented Languages will be a must-have on the shelves of all word freaks, grammar geeks, and plain old language lovers.

Praise For In the Land of Invented Languages: Esperanto Rock Stars, Klingon Poets, Loglan Lovers, and the Mad Dreamers Who Tried to Build A…

“Hats off to Okrent, who expertly exposes the history, culture, and preoccupations of this insular tribe who live among us. She rescues language inventors, or conlangers, from the oddball bin—utopianists all, they're the first biotechnologists, trying to leapfrog evolution and improve human life. They'll thank her but everyone else will, too, for finally making sense of the conlangers' discontents.” —Michael Erard, author of Um…: Slips, Stumbles, and Verbal Blunders, and What They Mean

“A lively, informative, insightful examination of artificial languages—who invents them, why, and why most of them fail. I loved this book.”—Will Shortz, Crossword Editor, New York Times

“Linguist Okrent explores some of the themes and shortcomings of 900 years worth of artificial languages. …Okrent gamely translates these languages with unspeakably hilarious results, and riffs on the colorful eccentricities of their megalomaniacal creators. Fortunately, her own prose is a model of clarity and grace; through it, she conveys fascinating insights into why natural language, with its corruptions, ambiguities and arbitrary conventions, trips so fluently off our tongues.” — Publishers Weekly, starred review

"Arika Okrent is a linguist whose fascination with the "faded plastic flowers" in the "lush orchid garden of languages" is recounted to delightful, often comic effect in "In the Land of Invented Languages."...Okrent's style is eminently suited to her approach, which is at once serious and playful, exemplified by her marvelous, snappy opening sentence: "Klingon speakers ... inhabit the lowest possible rung on the geek ladder."— Pittsburgh Post-Gazette

"The author...examines a variety of would-be languages and related philosophical tenets (there are no pure ideas, all signs depend on conventions) in a rigorously linguistical way. And yet her book is a pleasure to read. It shows how language systems connect, or don’t connect, with people."—New York Times

"Anyone who has felt the lure of words, odd grammatical systems or the potential connections between human thought and speech, is likely to enjoy this book just as much as I did."— Locus

"'In the Land of Invented Languages is a delight to read. It's humorous, intelligent, entertaining and highly informative. And it's a great source of knowledge about human languages and why they exasperate some people - because they are not perfect. But neither are we."—San Francisco Chronicle

"Okrent is a professional linguist and relates the place of these artificial languages in the confusion of human languages. She is also a great storyteller, and eccentric characters and dashed dreams are the stuff of this delightful book. "—Denver Post

Arika Okrent received a joint Ph.D. in the Department of Linguistics and the Department of Psychology's Cognition and Cognitive Neuroscience Program at the University of Chicago. She has also earned her first-level certification in Klingon. She lives in Philadelphia.
Loading...
or
Not Currently Available for Direct Purchase