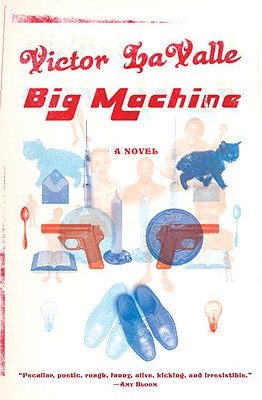 A fiendishly imaginative comic novel about doubt, faith, and the monsters we carry within us.


Ricky Rice was as good as invisible: a middling hustler, recovering dope fiend, and traumatized suicide cult survivor running out the string of his life as a porter at a bus depot in Utica, New York. Until one day a letter appears, summoning him to the frozen woods of Vermont. There, Ricky is inducted into a band of paranormal investigators comprised of former addicts and petty criminals, all of whom had at some point in their wasted lives heard The Voice: a mysterious murmur on the wind, a disembodied shout, or a whisper in an empty room that may or may not be from God.

Evoking the disorienting wonder of writers like Haruki Murakami and Kevin Brockmeier, but driven by Victor LaValle’s perfectly pitched comic sensibility Big Machine is a mind-rattling literary adventure about sex, race, and the eternal struggle between faith and doubt.

“Fractures all of our notions of how well-made fiction ought to behave. . .idea-hungry and haywire, too alive and abrasive to be missed.  The multicultural novel has come of age — smashingly.” — Kirkus (starred)

“LaValle is as much wry fabulist as he is dogged allegorist, and his flights of grim fancy are tethered by acute observations. He can be awfully funny, too. [His]devilish fable renders the visible world–of science, social hierarchies, and New York Times headlines–a load of cultish hooey.”
--Bookforum


“If Hieronymus Bosch and Lenny Bruce got knocked up by a woman with a large and compassionate heart, they might have brought forth Big Machine. But it is Victor LaValle's peculiar, poetic, rough and funny voice that brings it to us, alive and kicking and irresistible.”—Amy Bloom, author of the New York Times bestseller Away

“Big Machine is like nothing I’ve ever read, incredibly human and alien at the same time. LaValle writes like Gabriel Garcia Marquez mixed with Edgar Allen Poe, but this is even more than that. He’s written the first great book of the next America.”—Mos Def

“If the literary Gods mixed together Haruki Murakami and Ralph Ellison, and threw in several fistfuls of 21st century attitude, the result would be Victor LaValle.  Big Machine is a wonderful, original, and crazy novel.” —Anthony Doerr, author of The Shell Collector and About Grace


“Victor LaValle is one of the finest writers around—puzzling but never abstruse, compassionate but never pitying. With The Ecstatic, he produced one of my favorite novels of the decade, and now, with Big Machine, he has produced another: a pristine window into a flawed human soul, but also a daring fantasy through which America and all its troubles come sliding gradually into focus.” —Kevin Brockmeier, author of A Brief History of the Dead

“Sure to up his critical standing while furthering comparisons to Haruki Murakami, John Kennedy Toole and Edgar Allan Poe. Ricky’s intoxicating voice—robust, organic, wily—is perfect for narrating LaValle’s high-stakes mashup of thrilling paranormal and Ralph Ellison’s Invisible Man, as the fateful porter—something of a modern Odysseus rallied by a team of ‘spiritual X-men’—wanders through America’s ‘messianic hoo-hah.’”—Publishers Weekly, starred