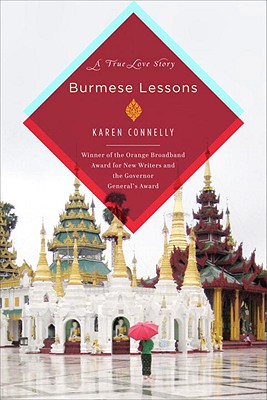 Orange Prize–winner Karen Connelly’s compelling memoir about her journey to Burma, where she fell in love with a leader of the Burmese rebel army.

When Karen Connelly goes to Burma in 1996 to gather information for a series of articles, she discovers a place of unexpected beauty and generosity. She also encounters a country ruled by a brutal military dictatorship that imposes a code of censorship and terror. Carefully seeking out the regime’s critics, she witnesses mass demonstrations, attends protests, interviews detained opposition leader Aung San Suu Kyi and flees from police. When it gets too risky for her to stay, Connelly flies back to Thailand, but she cannot leave Burma behind.

Connelly’s interest in the political turns more personal on the Thai-Burmese border, where she falls in love with Maung, the handsome and charismatic leader of one of Burma’s many resistance groups. After visiting Maung’s military camp in the jungle, she faces an agonizing decision: Maung wants to marry Connelly and have a family with her, but if she marries this man she also weds his world and his lifelong cause. Struggling to weigh the idealism of her convictions against the harsh realities of life on the border, Connelly transports the reader into a world as dangerous as it is enchanting.

In radiant prose layered with passion, regret, sensuality and wry humor, Burmese Lessons tells the captivating story of how one woman came to love a wounded, beautiful country and a gifted man who has given his life to the struggle for political change.

KAREN CONNELLY’s first novel, The Lizard Cage, won the 2007 Orange Broadband Award for New Writers. Her first book, The Dream of a Thousand Lives, won the Governor General’s Literary Award and was a New York Times Notable Book of the Year for 2001.

Finalist for the Governor General’s Award for Non-Fiction!

“Karen Connelly’s passionate and poetic memoir begins with her arrival in Burma in 1996 at the age of 27. Brash, naïve and bubbling with confidence, she is enchanted by the country, but also determined to ‘catch at least a glimpse of the truth—something beyond the beautiful images that are so readily available to the foreign eye’ . . . . Burmese Lessons is an intimate account of a country, a relationship and a man—all three of which remain elusive.”
—The New York Times Book Review

“Connelly isn't a hard-nosed journalistic observer. She’s intelligent and curious, also emotional, self-deprecating, openhearted. When she meets Maung, a handsome Burmese dissident, at a Christmas party in Chiang Mai, she begins a passionate and complicated cross-cultural romance. We know things can't end well, but we're with Connelly all the way on this journey. There's no resisting.”
—Newsday


"[A] heartbreaking romance set among the temples and verdure of Southeast Asia."
—The Seattle Times

“A sensually acute writer, Connelly describes the lush pleasures of losing oneself in a romantic, foreign place, but also details the bitter act of renunciation involved in realizing that her lover belonged not to her but to the larger struggle for Burmese democracy.”
—Vogue

“Karen Connelly has given her heart to Asia. I bow in gratitude to this writer whose love story is personal and political — and true.”
—Maxine Hong Kingston, author of The Fifth Book of Peace

“Burmese Lessons is a tour de force. At once beautiful literature, an intimate account of a moving journey, a nuanced portrait of another country, a complex yet quietly honest reportage, this book is also a page turner. It will, I believe, become a classic in the new genre that mixes personal memory with public events.”
—Susan Griffin, author of A Chorus of Stones and Wrestling with the Angel of Democracy

"Weaving a poignant personal love story within a larger cultural tapestry of Myanmar circa 1996, Canadian poet, memoirist, and novelist Connelly delivers a lyrical look at a country in the throes of a deeply pernicious military dictatorship.... Connelly writes eloquently of having given her heart to Asia."
—Publishers Weekly

"Treading the boundary between romance and politics, Connelly presents an evocative account of passionately living the revolution, shedding light on those who give everything to the cause, and those who love them. Piercing and raw."
—Booklist

“Burmese Lessons shows us more than a place, or a person in a place: it shows us a way to be in the world: open, seeing, breathing, awake.... In virtually every encounter, Connelly shows us that there is no escaping the political: the reach of the regime is pervasive and poisonous. The political is there in the personal.... This is the greatest lesson in Burmese Lessons, and the most important moment: the realization that the whole history of Burma is reflected in every individual life. The small story is the Bigger Picture.”
—Literary Review of Canada

"Haunting and poetic.... Connelly fans will be enthralled."
—Quill & Quire

“The recounting, re-imagining, of Connelly’s immersion in the mid-90s [in Burma and Thailand] reveals a brave, even foolhardy, idealistic, beautiful young woman utterly seduced, co-opted, transformed by Burmese culture….”
—Globe and Mail

"Connelly compels admiration for her brave intrusions into dangerous and awkward situations, and above all for her candour."
—National Post