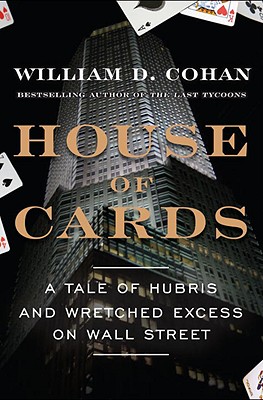 On March 5, 2008, at 10:15 A.M., a hedge fund manager in Florida wrote a post on his investing advice Web site that included a startling statement about Bear Stearns & Co., the nation’s fifth-largest investment bank: “In my book, they are insolvent.”

This seemed a bold and risky statement. Bear Stearns was about to announce profits of $115 million for the first quarter of 2008, had $17.3 billion in cash on hand, and, as the company incessantly boasted, had been a colossally profitable enterprise in the eighty-five years since its founding.

Ten days later, Bear Stearns no longer existed, and the calamitous financial meltdown of 2008 had begun.

How this happened – and why – is the subject of William D. Cohan’s superb and shocking narrative that chronicles the fall of Bear Stearns and the end of the Second Gilded Age on Wall Street. Bear Stearns serves as the Rosetta Stone to explain how a combination of risky bets, corporate political infighting, lax government regulations and truly bad decision-making wrought havoc on the world financial system.

Cohan’s minute-by-minute account of those ten days in March makes for breathless reading, as the bankers at Bear Stearns struggled to contain the cascading series of events that would doom the firm, and as Treasury Secretary Henry Paulson, New York Federal Reserve Bank President Tim Geithner, and Fed Chairman Ben Bernanke began to realize the dire consequences for the world economy should the company go bankrupt.

But HOUSE OF CARDS does more than recount the incredible panic of the first stages of the financial meltdown. William D. Cohan beautifully demonstrates why the seemingly invincible Wall Street money machine came crashing down. He chronicles the swashbuckling corporate culture of Bear Stearns, the strangely crucial role competitive bridge played in the company’s fortunes, the brutal internecine battles for power, and the deadly combination of greed and inattention that helps to explain why the company’s leaders ignored the danger lurking in Bear’s huge positions in mortgage-backed securities.

The author deftly portrays larger-than-life personalities like Ace Greenberg, Bear Stearns’ miserly, take-no-prisoners chairman whose memos about re-using paper clips were legendary throughout Wall Street; his profane, colorful rival and eventual heir Jimmy Cayne, whose world-champion-level bridge skills were a lever in his corporate rise and became a symbol of the reasons for the firm’s demise; and Jamie Dimon, the blunt-talking CEO of JPMorgan Chase, who won the astonishing endgame of the saga (the Bear Stearns headquarters alone were worth more than JP Morgan paid for the whole company).

Cohan’s explanation of seemingly arcane subjects like credit default swaps and fixed- income securities is masterful and crystal clear, but it is the high-end dish and powerful narrative drive that makes HOUSE OF CARDS an irresistible read on a par with classics such as LIAR’S POKER and BARBARIANS AT THE GATE.

Written with the novelistic verve and insider knowledge that made THE LAST TYCOONS a bestseller and a prize-winner, HOUSE OF CARDS is a chilling cautionary tale about greed, arrogance, and stupidity in the financial world, and the consequences for all of us.


Praise For House of Cards: A Tale of Hubris and Wretched Excess on Wall Street…

"Engrossing....[Cohan] gives us in these pages a chilling, almost minute-by-minute account of the 10, vertigo-inducing days that one year ago revealed Bear Stearns to be a flimsy house of cards in a perfect storm....He does a deft job of explicating the underlying reasons that put Bear Stearns in peril in the first place....turns complex Wall Street maneuverings into high drama that is gripping — and almost immediately comprehensible — to the lay reader....riveting, edge-of-the-seat reading"
--Michiko Kakutani, The New York Times

"Cohan vividly documents the mix of arrogance, greed, recklessness, and pettiness that took down the 86 year old brokerage house and then the entire economy. It's a page-turner in the tradition of the 1990 Barbarians at the Gate by Bryan Burrough and John Heylar, offering both a seemingly comprehensive understanding of the business and wide access to insiders....hard to put down, especially thanks to its dishy, often profane, quotes from insiders" --BusinessWeek

"Masterfully reported....[Cohan] has turned into one of our most able financial journalists....he deploys not only his hands-on experience of this exotic corner of the financial industry but also a remarkable gift for plain-spoken explanation...the other great strength of this important book is the breadth and skill of the author's interviews...Cohan does a brilliant job of sketching in the eccentric, vulgar, greedy, profane and coarse individuals who ignored all these warnings to their own profit and the ruin of so many others. It's impossible to do justice to his reportorial detail in a brief review..." -- Los Angeles Times


"A riveting blow-by-blow account of the days leading up to the government-backed shotgun wedding (to JPM)." -- The Economist

"A masterly reconstruction of Bear Stearns implosion--a tumultuous episode in Wall Street history that still reverberates throughout our economy today....meticulous reporting.....first drafts of history don't get much better than this" --Bloomberg

WILLIAM D. COHAN, a former senior Wall Street investment banker, is the bestselling author of The Last Tycoons and the winner of the 2007 FT/Goldman Sachs Business Book of the Year Award. He writes for The Financial Times, Fortune, the New York Times, the Washington Post, the Daily Beast, and appears frequently on CNBC.