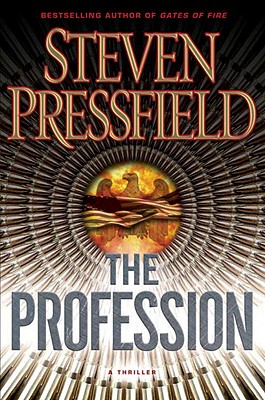 The “master storyteller” (Publishers Weekly) and bestselling author of Gates of Fire, The Afghan Campaign, and Killing Rommel returns with a stunning, chillingly plausible near-future thriller about the rise of a privately financed and global military industrial complex.

The year is 2032. The third Iran-Iraq war is over; the 11/11 dirty bomb attack on the port of Long Beach, California is receding into memory; Saudi Arabia has recently quelled a coup; Russians and Turks are clashing in the Caspian Basin; Iranian armored units, supported by the satellite and drone power of their Chinese allies, have emerged from their enclaves in Tehran and are sweeping south attempting to recapture the resource rich territory that had been stolen from them, in their view, by Lukoil, BP, and ExxonMobil and their privately-funded armies. Everywhere military force is for hire.  Oil companies, multi-national corporations and banks employ powerful, cutting-edge mercenary armies to control global chaos and protect their riches.  Even nation states enlist mercenary forces to suppress internal insurrections, hunt terrorists, and do the black bag jobs necessary to maintain the new New World Order.

Force Insertion is the world's merc monopoly. Its leader is the disgraced former United States Marine General James Salter, stripped of his command by the president for nuclear saber-rattling with the Chinese and banished to the Far East.  A grandmaster military and political strategist, Salter deftly seizes huge oil and gas fields, ultimately making himself the most powerful man in the world.  Salter's endgame is to take vengeance on those responsible for his exile and then come home...as Commander in Chief. The only man who can stop him is the novel's narrator, Gilbert "Gent" Gentilhomme, Salter's most loyal foot soldier and as close to him as the son Salter lost. As this action-jammed, lightning fast, and brutally realistic novel builds to its heart-stopping climax Gent launches his personally and professionally most desperate mission: to take out his mentor and save the United States from self destruction.

Infused by a staggering breadth of research in military tactics and steeped in the timeless themes of the honor and valor of men at war that distinguish all of Pressfield’s fiction, The Profession is that rare novel that informs and challenges the reader almost as much as it entertains.

Praise For The Profession: A Thriller…

"'The Profession' is a compelling mix of modern weaponry, modern communications, modern politics and the warrior's ancient ethos of honor and loyalty. It moves quickly and with deadly precision ... This is the modern world taken to its logical and frightening extreme." - Los Angeles Times

"Steven Pressfield, in "The Profession", has written a novel of the near future that is as good and in some cases better than anything Tom Clancy ever wrote in his day."
-Mark Whittington, Yahoo!

"Pressfield’s military thriller stands out from the crowd by speculating on what the next generation of warfare will be like and then dropping the reader right into the action. Clancy fans should give this a shot." -Booklist

"When I read a novel, I want to go someplace, with somebody who's been there.  In THE PROFESSION, Pressfield takes us into the heart of combat—and even deeper than heat of the action: he takes us into the soul of the warrior. This is all the more remarkable because the world he leads us into hasn't happened yet—though we see its possibilities, its unfolding reality, all around us. To give us this book, Pressfield went to the places were soldiers and ideologies are colliding, and he sifted the thoughts, motives and skills of the men at the cutting edge of those conflicts. But best of all, for me, is that he seems to have looked into my heart too."
–Randall Wallace, screenwriter of the Academy Award winner Braveheart

“From owner-operated Apache gunships to The New York Google Times, THE PROFESSION is chilling because it rhymes just enough with today to make us wonder whether this future will be, or only might be. Pressfield's trademark lessons in honor and loyalty are here, woven into the classical tradition of the warrior's way. It's a ripping read.”
—Nathaniel Fick, author of the NYT bestseller ONE BULLET AWAY, and CEO of the Center for a New American Security

“Pressfield imagines a world in which private military forces have all the power…When the commander of the largest force around decides to take control of the United states, his top commando—Gilbert “Gent” Gentilhomme—opts to wipe out his commander. Pressfield dominates the military thriller genre, and his works are realistic enough that military colleges like West Point assign them." — Library Journal

"Pressfield's impressive research shows throughout this novel.... a book that paints an all-too-plausible future in which American outsources its dirtiest jobs."
—Kirkus Reviews

Steven Pressfield is the author of "Gates of Fire," "The Legend of Bagger Vance," "Killing Rommel" and "The War of Art." His books are in the curriculum at West Point, Annapolis and the Naval War College, as well as being on the Commandant's Reading List for the Marine Corps. He has an international following for his online series, including 'It's the Tribes, Stupid, ' and 'Writing Wednesdays.' He is a graduate of Duke University and lives in Los Angeles.
Loading...
or
Not Currently Available for Direct Purchase