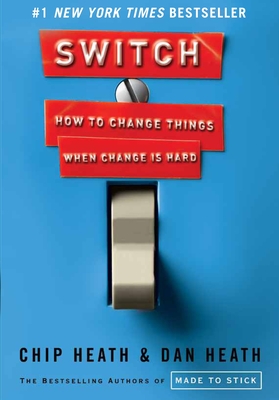 How to Change Things When Change Is Hard

Why is it so hard to make lasting changes in our companies, in our communities, and in our own lives?

In Switch, the Heaths show how everyday people - employees and managers, parents and nurses - have united both minds and, as a result, achieved dramatic results:

• The lowly medical interns who managed to defeat an entrenched, decades-old medical practice that was endangering patients
• The home-organizing guru who developed a simple technique for overcoming the dread of housekeeping
• The manager who transformed a lackadaisical customer-support team into service zealots by removing a standard tool of customer service

In a compelling, story-driven narrative, the Heaths bring together decades of counterintuitive research in psychology, sociology, and other fields to shed new light on how we can effect transformative change. Switch shows that successful changes follow a pattern, a pattern you can use to make the changes that matter to you, whether your interest is in changing the world or changing your waistline.

Praise For Switch: How to Change Things When Change Is Hard…

“Witty and instructive . . . The Heath brothers think that the sciences of human behavior can provide us with tools for making changes in our lives—tools that are more effective than 'willpower,' 'leadership' and other easier-said-than-done solutions. . . . For any effort at change to succeed, the Heaths argue, you have to 'shape the path.' With Switch they have shaped a path that leads in a most promising direction.”—The Wall Street Journal

“Using the terminology of University of Virginia psychologist Jonathan Haidt, the Heaths designate the emotional side of the mind as the Elephant and the rational side as the Rider. . . . Switch is crammed with stories…covering a number of fields to drive home the importance of using the strengths of both the Rider and the Elephant to make change happen. This could be a valuable read for the would-be change-makers of the Obama administration.”—Fort Worth Star-Telegram

“Whether you're a manager, a parent or a civic leader, getting people to change can be tricky business. In Switch, brothers Chip and Dan Heath—authors of the bestselling Made to Stick—survey efforts to shape human behavior in search of what works. . . . Even when change isn't easy, it's often worth making.”—Time

“Dan and Chip Heath have done it again. . . . Any leader looking to create change in his organization need not look beyond this little book. It is packed with examples and hands-on tools that will get you moving right away. And it is really a fun read.”—Business Week

CHIP HEATH is a professor at the Graduate School of Business at Stanford University. He lives in Los Gatos, California. DAN HEATH is a senior fellow at Duke University's Center for the Advancement of Social Entrepreneurship (CASE). He lives in Raleigh, North Carolina. The Heath brothers are the bestselling authors of Made to Stick and Switch. They write a regular column in Fast Company magazine, and have appeared on Today, NPR's Morning Edition, MSNBC, CNBC, and have been featured in Time, People and US News and World Report.
Loading...
or support indie stores by buying on