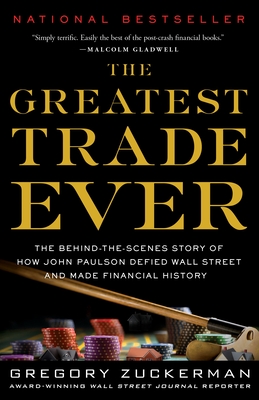 The Greatest Trade Ever (Paperback)

In 2006, hedge fund manager John Paulson realized something few others suspected--that the housing market and the value of subprime mortgages were grossly inflated and headed for a major fall.  Paulson's background was in mergers and acquisitions, however, and he knew little about real estate or how to wager against housing.  He had spent a career as an also-ran on Wall Street. But Paulson was convinced this was his chance to make his mark. He just wasn't sure how to do it.  Colleagues at investment banks scoffed at him and investors dismissed him.  Even pros skeptical about housing shied away from the complicated derivative investments that Paulson was just learning about.  But Paulson and a handful of renegade investors such as Jeffrey Greene and Michael Burry began to bet heavily against risky mortgages and precarious financial companies. Timing is everything, though. Initially, Paulson and the others lost tens of millions of dollars as real estate and stocks continued to soar. Rather than back down, however, Paulson redoubled his bets, putting his hedge fund and his reputation on the line.
In the summer of 2007, the markets began to implode, bringing Paulson early profits, but also sparking efforts to rescue real estate and derail him. By year's end, though, John Paulson had pulled off the greatest trade in financial history, earning more than $15 billion for his firm--a figure that dwarfed George Soros's billion-dollar currency trade in 1992.  Paulson made billions more in 2008 by transforming his gutsy move.  Some of the underdog investors who attempted the daring trade also reaped fortunes. But others who got the timing wrong met devastating failure, discovering that being early and right wasn't nearly enough.
Written by the prizewinning reporter who broke the story in The Wall Street Journal, The Greatest Trade Ever is a superbly written, fast-paced, behind-the-scenes narrative of how a contrarian foresaw an escalating financial crisis--that outwitted Chuck Prince, Stanley O'Neal, Richard Fuld, and Wall Street's titans--to make financial history.

GREGORY ZUCKERMAN is a senior writer at the Wall Street Journal, where he has been a reporter for twelve years. He pens the widely read “Heard on the Street” column and writes about hedge funds, investing, and other Wall Street topics. Zuckerman appears on CNBC twice a week to explain complex trades. He is a two-time winner of the Gerald Loeb Award for coverage of the credit crisis, the demise of WorldCom, and the collapse of hedge fund Amaranth Advisors, and he is a recipient of other awards.

Praise For The Greatest Trade Ever: The Behind-the-Scenes Story of How John Paulson Defied Wall Street and Made Financial History…

"Mr. Zuckerman is a first-rate reporter who is also able to explain the complexities of real estate finance in layman’s terms. At times, The Greatest Trade Ever reads like a thriller."
--The New York Times

“How Paulson and a handful of contrarian investors pulled off this once-in-a-lifetime coup is the subject of The Greatest Trade Ever ... a fascinating and believable counter-narrative to the growing pile of books recounting the disastrous mistakes made by many of the supposedly smartest minds on Wall Street. It is also a surprisingly dramatic work...In The Greatest Trade Ever, Zuckerman skillfully shows how Paulson and a few cohorts anticipated a disaster and figured out a way to profit.”
--BusinessWeek

"More than a cinematic narrative of how Paulson and others figured out how to short the market. We’re also reminded of how opaque and illiquid some financial instruments are, how little Wall Street executives understood them, and how difficult it was for more knowledgeable bankers to say that the subprime emperor had no clothes."
--Bloomberg.com

"Zuckerman has a story to tell, a thread to follow, and it just happens to turn out that by following the saga of John Paulson, Zuckerman reveals all kinds of fascinating perspectives on complex finance, the real estate bubble and Wall Street and Washington's difficulties in putting the two together.”
--TheDeal.com

“A magnificent insider look at how Paulson and others profited off of subprime’s demise, detailing both the formulation and implementation of such a trade…Zuckerman’s work is both insightful and gripping.”
--Marketfolly.com

"Greg Zuckerman was the first to tell the world about John Paulson's sensational trade…He's written the definitive account of a strange and wonderful subplot of the financial crisis."
--Michael Lewis, bestselling author of Moneyball and Home Game

"Gregory Zuckerman takes us to Wall Street's heart of darkness, where mushroomed a $1 trillion subprime mortgage market that only the few, the brave, the smart dared short. The story of John Paulson and the few colorful contrarians who made outsized bets and outrageous profits on the subprime implosion, is at once a great page-turner and a great illuminator of the market's crash."
--John Helyar, co-author, Barbarians at the Gate: The Fall of RJR Nabisco

"Greg Zuckerman's book is much, much more than a brilliant account of Paulson's trade of the century; it also provides a highly enjoyable and lucid journey through the analytical and emotional maze that constituted the financial markets on the eve of the Great Recession. The book is compulsory reading for those looking for exceptional insights on the complex forces that interconnect Wall Street, hedge funds and Main Street."
--Mohamed El-Erian, Chief Executive Officer of Pacific Investment Management Co. and bestselling author of When Markets Collide: Investment Strategies for the Age of Global Economic Change

"I couldn't put it down. All I can say is, WOW! What a story! Incredibly illuminating."
--Whitney Tilson, hedge fund manager and author of More Mortgage Meltdown: 6 Ways to Profit in These Bad Times

"A wonderful, fast-paced summary of how John Paulson, a hedge fund manager, made billions of dollars."
--Sarasota Herald-Tribune

"The Greatest Trade Ever is aptly titled, for it is possibly the greatest book to come out of the financial crisis of 2007 — 2008, and it’s certainly up there in the top 3."
--Bnet.com

"...a Tour de Force chronicling the rise of John Paulson from a mediocre merger arbitrage investment manager into a financial titan."
--Marketthoughts.com