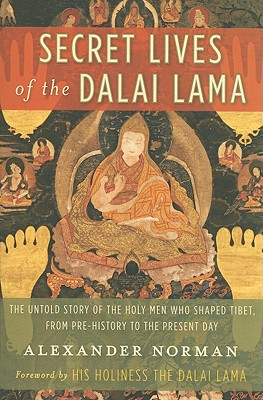 Secret Lives of the Dalai Lama

The Untold Story of the Holy Men Who Shaped Tibet, from Pre-history to the Present Day

The Complete Story of the Dalai Lamas

His Holiness the Fourteenth Dalai Lama is known to the world for his efforts to preserve Tibetan culture and for his inspiring spiritual teachings. Often unnoticed, however, is the long, colorful history from which this most beloved of holy men has emerged. In Secret Lives of the Dalai Lama, Alexander Norman tells this story in full for the first time, from Tibetan Buddhism’s foundational narratives to the present-day crisis faced by Tibet.
And what a story it is. Along with dedicated monks selflessly serving the Tibetan people, among His Holiness’s spiritual forebears there are a Dalai Lama who waged wars, a womanizing and inebriated poet, and several who wound up dead following disputes over temporal power. Also, while Western practitioners focus on Tibetan Buddhism’s liberating vision of enlightenment, it simultaneously contains ritual practices of prophecy and magic, as well as a vivid pantheon of deities and demons.
In the end, although Tibet falls short of the Western myths of a Himalayan utopia, by illuminating the historical struggle toward compassion and selflessness embodied in the Dalai Lama lineage, Secret Lives of the Dalai Lama ultimately reveals a reality that is vastly more compelling than any romance of “Shangri-La” and provides deeper reasons for admiring Tibetan tradition.

Praise For Secret Lives of the Dalai Lama: The Untold Story of the Holy Men Who Shaped Tibet, from Pre-history to the Present Day…

“I commend this book to anyone wishing to deepen their knowledge of Tibetan history and culture.”
– His Holiness the Fourteenth Dalai Lama

“Secret Lives of the Dalai Lama provides the modern reader a most insightful description of Tibetan history and culture. Engaging, accessible, and scrupulously fair in its treatment of the subject, perhaps its greatest merit is that it offers a new and rich way to appreciate the life and work of the present Dalai Lama.”
– Thupten Jinpa, PhD, Tibetan scholar and the principal translator to the Dalai Lama

ALEXANDER NORMAN has known His Holiness the Dalai Lama since 1988 and has previously worked closely with him on his bestselling books Freedom in Exile and Ethics for the New Millennium. He is currently a member of Blackfriars Hall at the University of Oxford.
Loading...
or
Not Currently Available for Direct Purchase