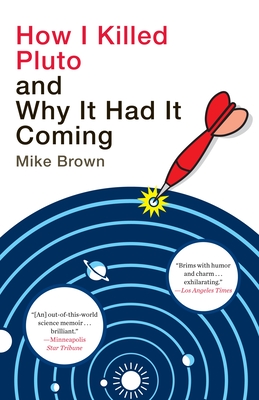 How I Killed Pluto and Why It Had It Coming

The solar system most of us grew up with included nine planets, with Mercury closest to the sun and Pluto at the outer edge. Then, in 2005, astronomer Mike Brown made the discovery of a lifetime: a tenth planet, Eris, slightly bigger than Pluto. But instead of adding one more planet to our solar system, Brown’s find ignited a firestorm of controversy that culminated in the demotion of Pluto from real planet to the newly coined category of “dwarf” planet. Suddenly Brown was receiving hate mail from schoolchildren and being bombarded by TV reporters—all because of the discovery he had spent years searching for and a lifetime dreaming about.

A heartfelt and personal journey filled with both humor and drama, How I Killed Pluto and Why It Had It Coming is the book for anyone, young or old, who has ever imagined exploring the universe—and who among us hasn’t?

“[An] out-of-this-world science memoir . . . brilliant . . . brings clarity and elegance to the complexities of planetary science. Brown is also a surprisingly self-effacing and entertaining genius.”—Minneapolis Star Tribune

“Brown’s brisk, enjoyable How I Killed Pluto and Why It Had It Coming chronicles the whole saga [of the demotion of Pluto] and, in the process, makes [its] sad fate easier to take. If we’ve lost a planet, we’ve gained a sprightly new voice for popular science.”—The Wall Street Journal

“Eminently readable and entertaining . . . blends elements of sleuthing, international intrigue, and the awe and wonder intrinsic to the exploration of space.”—The Oregonian

“[Brown] might be the finest scientist alive today. . . . We’re all better off for this man’s breathtaking commitment to science.”—The Boston Globe

Mike Brown is the Richard and Barbara Rosenberg Professor of Planetary Astronomy at the California Institute of Technology. In 2006 he was named one of Time magazine’s 100 People Who Shape Our World as well as one of Los Angeles magazine’s Most Influential People in L.A. He lives in Southern California with his wife and daughter.
Loading...
or support indie stores by buying on