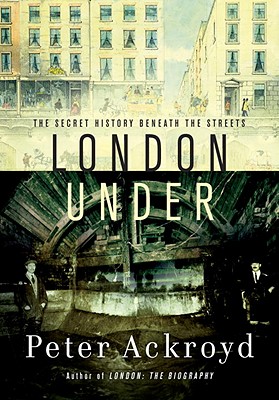 The Secret History Beneath the Streets

London Under is a wonderful, atmospheric, imagina­tive, oozing short study of everything that goes on under London, from original springs and streams and Roman amphitheaters to Victorian sewers, gang hideouts, and modern tube stations. The depths below are hot, warmer than the surface, and this book tunnels down through the geological layers, meeting the creatures, real and fictional, that dwell in darkness—rats and eels, mon­sters and ghosts. When the Underground’s Metropolitan Line was opened in 1864, the guards asked for permission to grow beards to protect themselves against the sulfurous fumes, and named their engines after tyrants—Czar, Kaiser, Mogul—and even Pluto, god of the underworld.

To go under London is to penetrate history, to enter a hid­den world. As Ackroyd puts it, “The vastness of the space, a second earth, elicits sensations of wonder and of terror. It partakes of myth and dream in equal measure.”

PETER ACKROYD is the author of "London: The Biography," "Shakespeare: The Biography," "Thames: The Biography," and "Venice: Pure City"; acclaimed biographies of T. S. Eliot, Dickens, Blake, and Sir Thomas More; and several successful novels. He has won the Whitbread Book Award for Biography, the James Tait Black Memorial Prize, and the Somerset Maugham Award, among others.

Praise For London Under: The Secret History Beneath the Streets…

“There’s plenty of marvelous information in the book about what lies beneath London. . . . Ackroyd mines historical anecdotes to great effect. . . . He is not just interested in London’s hidden relics; he’s interested in what they—and the idea of an underground—mean to a culture. London’s underworld is a ‘shadow or replica of the city,’ and it is also a shadow of ourselves and our thoughts, the stuff that’s discovered when we open the trapdoor.”
—The Daily Beast

Praise for London: The Biography

“Magnificent. . . . Succeeds in animating on the page the life of one of the oldest and greatest . . . cities in the world.”
—The New York Times Book Review

“A wonderful book, a treasure of information and anecdote … a book to be taken up again and again for the pleasures that lie within.”
—The Chicago Tribune

“Ackroyd writes in a wonderfully graphic style that carries the reader through historical byways effortlessly.”
—The Denver Post

“A tour de force by a writer of immense skill. . . . A treasure of information and anecdote about one of the world’s great cities, a book to be taken up again and again for the pleasures that lie within.”
—The Seattle Times

“Packed with strange delights and bizarre occurrences. . . . Ackroyd is a writer of memorable, eccentrically rhythmic sentences that one wants to quote at length.”
—Newsday