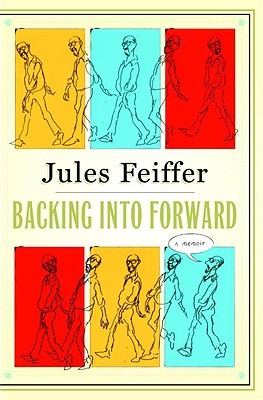 The award-winning cartoonist, playwright, and author delivers a witty, illustrated rendition of his life, from his childhood as a wimpy kid in the Bronx to his legendary career in the arts.

A gifted storyteller who has delighted readers and theater audiences for decades, Jules Feiffer now turns his talents to the tale of his own life.

Plagued by learning problems, a controlling mother, and a debilitating sense of fear, Feiffer embarked on his first cartoon apprenticeship at the age of seventeen, emboldened only by a passion for success and an aptitude for failure. He vividly recalls those transformative years working under the legendary Will Eisner, and later, after he was drafted into the army, his evolution from “smart-ass kid into an enraged satirist.” Backing into Forward also traces Feiffer's love life, from a doomed hitchhiking trip to reclaim his high-school sweetheart to losing his virginity in Greenwich Village, and his road to marriage and fatherhood.

At the center of this journey is Feiffer's prolific creativity. In dazzling detail, he recounts the birth of his subversive graphic novella Munro, his entrée into New York's literary salons, collaborations with film greats Mike Nichols, Robert Altman, and Jack Nicholson, and other major turning points. Brimming with wry punch lines, slices of Americana, and pithy social commentary, Backing into Forward charts Feiffer's rise as an unlikely and incisive provocateur during the conformist fifties and the Vietnam and Civil Rights sixties and seventies.


Praise For Backing Into Forward: A Memoir…

"Resonant, self-­lacerating and frequently hilarious . . . . The voice in Backing Into Forward is not spry, not pretty energetic for an old person, but youthful, full of insouciance, vanity and playfulness. While other accomplished men bronze their success or dip it in amber, Feiffer treats his own as one big, wonderful caper.”
—The New York Times Book Review

“[Backing Into Forward] succeeds in sounding like the best of Mr. Feiffer’s cartoons: funny, acerbic, subversive, fiercely attuned to the absurdities in his own life and in the country at large.”
—Michiko Kakutani, The New York Times

“Feiffer is a fantastic raconteur, a thoroughly engaging narrator of his life, whether recollecting 1950s Greenwich Village and Brooklyn, his false starts at love and sex, his failed first marriage, his (happy) remarriage or parenthood. However entertaining his anecdotes are, nothing is more absorbing than the passages in which Feiffer talks about his struggles and triumphs as an artist. It's fascinating to read about his process, which is intuitive and spontaneous rather than analytical . . . . Best of all, a number of Feiffer's drawings, from various stages of his life, are interspersed throughout the book. His writing voice, just like his drawing style, is loose and accessible, making you feel as though you've spent time in his charming presence.”
—The Dallas Morning News

“Lively and engaging . . . . Backing Into Forward is a fine companion to [Feiffer’s] art. It's also an illuminating book about the creative process, an entertaining read, and a cautionary tale about an era that really doesn't deserve a memorial.”
—The Village Voice

“At 81, [Feiffer’s] time has come. Again. And this wonderfully weird and revealing book proves it. [Backing Into Forward] has all the neurotic splendor and self-protective disingenuousness of truth. It's by turns entertaining and gripping about the life of a wildly talented man who was bad at sports, bad at school (he never went to college and wasted years fearing discovery) and by his own cheerful admission, not all that great at drawing either. But look at the deeply neurotic and emaciated lines in any characteristic Feiffer cartoon. No one ever drew late-20th century urban American civilization any better. In memoir form, he's grand company.”
—The Buffalo News

“People usually read the memoirs of famous people for a front-row seat to an important life, but Feiffer’s rambunctious, rambling autobiography treats this notion with satire and self-deprecation . . . . Consequently, Backing Into Forward isn’t a portrait of the artist. But it is a remarkable you-are-there remembrance of the times that created the author, and the verbosity and rage that fueled him.”
—Time Out New York

"Feiffer's book is as penetrating and lacerating as his strips have always been, except that here, Feiffer's target is Feiffer himself. He writes like he draws—loosely, almost casually, yet somehow with precision."
—TheDailyBeast.com

“A book that pulls the witty, subversive and celebrated writer-cartoonist into sharp focus . . . . By the end, I was circling passages and wondering about the nature of genius . . . . Peppering the book are reprints of Feiffer’s cartoons and illustrations, though my favorite are the newly made “last panels” with which he closes the memoir . . . . Full of movement and energy, the drawings make an elegant finish to a book I can tell will stick with me like a good friend.”
—Cleveland Plain Dealer

"Jules Feiffer's account of his multifaceted career will delight that generation of readers for whom his whimsical, sardonic and often politically barbed Village Voice cartoons were a cultural touchstone."
—The Washington Post

“A thoughtful, introspective cartoonist who can also write beautifully? Yes, it is possible. Backing into Forward is vivid, buoyant, and even a little discomfiting in its candor. I couldn't put down.”
—Chris Ware

“Jules Feiffer, prolific hand and eye behind so many brilliant comics, screenplays, novels, illustrations and now this fine, humane autobiography, remains one of the signature voices of a long era of American satire and dissent, the bridge from Lenny Bruce to The Simpsons.”
—Jonathan Lethem

“Jules Feiffer’s original and neurotic voice—expressing the whiny child in every adult and the world-weary sophisticate inside every kid—reinvented comics in the 1950s and made possible what’s now called the ‘graphic novel.’ His engaging new memoir is told in that same witty and perceptive New York cadence, now mellowed and laced with wisdom. He’s an inspiration.”
—Art Spiegelman

“Backing into Forward is dark and charming, touching and barbed and crackling with wit. An important book by a critical artist that sheds light on his fascinating life and the most vibrant period in the life of American culture.”
—Michael Chabon

“For those of us for whom Sick Sick Sick was the first glimmer of cool, who fled to the Village Voice for forty years to get Feiffer's take on our American disasters, and who learned the dark truth about men from Carnal Knowledge, this is the book that finally explains how one guy did all that. Backing into Forward is not only a hilarious memoir by the dazzling, discomfiting comet that is Jules Feiffer, but a rambunctious and vivid cultural history by an American master.”
—Honor Moore

"Jules Feiffer has done the unthinkable—he's written a completely honest, tell-it-like-it-is let-it-all-hang-out memoir. But it's totally in character.  He's been nailing the bad guys with his pen for decades."
—Seymour Hersh

“Can you smile and grit your teeth at the same time? That's what Jules Feiffer's hilarious, savage memoir makes you want to do. Don't miss it.”
—Anthony Lewis

JULES FEIFFER's Pulitzer Prize-winning comic strip ran for forty-two years in the "Village Voice" and one hundred other papers." "He also penned the Obie Award-winning play "Little Murders" and the screenplay for "Carnal Knowledge." He lives in New York City.
Loading...
or
Not Currently Available for Direct Purchase